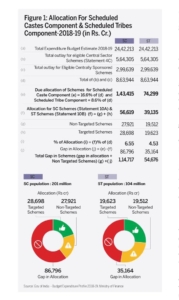 The Dalit community’s analysis of the the 2018 budget of the Government of India shows that less than half of the required amount has been allocated for schemes mean to benefit  Dalits and Adivasis in India.

Approximately one fourth of India’s population consists of Dalits and Adivasis, and they are supposed to receive budget allocations according to their numbers. IDSN member, The National Campaign on Dalit Human Rights, has released a comprehensive analysis of the 2018 budget. But yet again, these groups have been let down by the country’s government in the 2018 budget.

Paul Divakar of the National Campaign on Dalit Human Rights (NCDHR) commented on the budget stating,

“A deeper analysis of the nature of allocation for SC welfare schemes show that only 50.7% has been allocated towards targeted schemes for SCs and 51.24% for STs.  While a majority of the allocation is under general or non-targeted schemes, that include several administration related expenses, they are contrary to the underlying principle of ‘directly benefit individuals, families and hamlets belonging to SC/ST Community’.  The targeted schemes amounted only to Rs 28,698 crore for SCC and Rs 19,623 crores out of the total allocations. The special components for SCs and STs have been visionary, but the purpose remains defeated due to gross under allocations, notional and general allocations along with unspent amount. The Jadhav guidelines, meant to be followed while allocating, have been continuously flouted. Therefore, it is absolutely paramount that the sub-plans are legislated with strict mechanisms for effective implementation.”

The analysis of the schemes introduced in the financial year 2017-18 reveals that out of 36 new schemes only eight were for the direct benefit of SCs; and out of 70 new schemes for STs only 15 were benefiting them directly.

In the analysis document NCDHR offers four key recommendations to remedying the situation: