IDSN member People’s Watch is fighting a legal battle in the Indian courts to regain their foreign funding license, first revoked by the Indian Government in 2012. The organisation, a program unit  of the Centre for Promotion of Social Concerns [CPSC], has been charged by the Ministry of Home Affairs with “using foreign contributions to the detriment of India’s image.” The loss of the license to receive foreign funding (FCRA) has completely crippled the organisation, which has for over a decade been protecting and upholding the rights of the most disadvantaged groups in India. 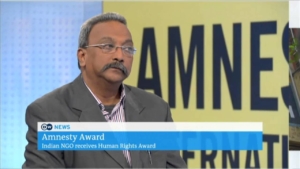 A counter affidavit to the Delhi High Court, filed by the Indian Ministry of Home Affairs, states that they have cut off the right to receive foreign funding for CPSC – People’s Watch, on the grounds that,

”In the year 2011-13, Henri Tiphagne, Executive Director, People’s Watch (PW), was noticed to be receiving foreign contributions. He was found to be providing material and information to UN Special Rapporteurs and US Embassy and British High Commission officials…”

Henri Tiphagne, a long term member of the IDSN board and award winning human rights defender, is shocked at the statements in the counter affidavit.

“If my country is making it a crime to defend the rights of those of its citizens who need it the most, it is surely not human rights defenders who are tarnishing India’s image abroad but rather the administration itself.” Said Henri Tiphagne. “I strongly believe that this is a case of reprisals, a case of miscarriage of justice and the revocation of our license must be overturned as a matter of urgency by the NHRC and the Delhi High Court, which are both dealing with this case .”

The revocation of foreign funding licenses for organisations defending the rights of disadvantaged groups forms part of a disturbing trend in India. In a legal analysis published in April 2016 by the UN Special Rapporteur on freedom of assembly and association, it is stated that the FCRA does not conform to international law, principles, and standards and that the restrictions contained in the Act are, “likely to disproportionately impact those associations engaged in critical human rights work, those which address issues of government accountability and good governance, or represent vulnerable and minority populations or views.”

In June 2016, the UN Special Rapporteurs on human rights defenders, Michel Forst, on freedom of expression, David Kaye, and on freedom of association, Maina Kiai, called on the Indian government to repeal the FCRA, which they said was “being used more and more to silence organisations involved in advocating civil, political, economic, social, environmental or cultural priorities, which may differ from those backed by the Government.”

The European Parliament have also called on the Indian authorities to repeal those provisions of the Act “which do not conform to international standards and potentially undermine the work of NGOs, including Dalit organisations and other organisations representing disadvantaged groups in Indian society, by impeding them from receiving funds from international donors.”

In November 2016, global human rights NGOs Human Rights Watch and Amnesty International similarly voiced deep concern over what they see as the Indian Government silencing NGOs critical of their stance through revoking their foreign funding licenses.

The Indian Constitution and key legislation in India is very clear in protecting the human rights of all people in India including special attention to the most marginalised groups. It is therefore hoped that the Indian Government and the independent National Human Rights Commission (NHRC) in India will now also live up to its obligations to implement those rights and support those defending them, by ceasing to block funding and hamper operations of human rights defenders in the world’s largest democracy.