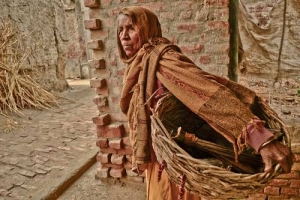 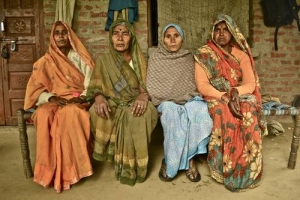 The 96-page report, “Cleaning Human Waste: ‘Manual Scavenging,’ Caste, and Discrimination in India,” documents the coercive nature of manual scavenging. Across India, castes that work as “manual scavengers” collect human excrement on a daily basis, and carry it away in cane baskets for disposal. Women from this caste usually clean dry toilets in homes, while men do the more physically demanding cleaning of sewers and septic tanks. The report describes the barriers people face in leaving manual scavenging, including threats of violence and eviction from local residents but also threats, harassment, and unlawful withholding of wages by local officials.

In 2014, Human Rights Watch interviewed more than 135 people, including more than 100 people currently or formerly working as manual scavengers, in the Indian states of Gujarat, Madhya Pradesh, Maharashtra, Rajasthan, and Uttar Pradesh. Women who clean dry toilets in rural areas often are not paid cash wages, but instead as a customary practice receive leftover food, grain during harvest, old clothes during festival times, and access to community and private land for grazing livestock and collecting firewood – all at the discretion of the households they serve. In areas where “untouchability” practices are intact, food is dropped into their hands or thrown in front of them.

Local authorities are frequently complicit in the discrimination against manual scavengers, Human Rights Watch said. Human Rights Watch documented cases in which government village councils and municipalities have engaged in caste-based recruitment to clean open defecation areas. Those who do this work also suffer discrimination in other facets of their lives, including access to education, to community water sources, and to government housing and employment benefits. Human Rights Watch found that the police and other authorities fail to act on complaints by manual scavengers who have been threatened with violence, eviction and other offenses.

“People work as manual scavengers because their caste is expected to fulfill this role, and are typically unable to get any other work,” said Ganguly. “This practice is considered one of the worst surviving symbols of untouchability because it reinforces the social stigma that these castes are untouchable and perpetuates discrimination and social exclusion.”

There are currently no comprehensive government surveys that accurately account for the prevalence of manual scavenging in the country. Accepting the lack of proper surveys, in March 2014, the Supreme Court of India confirmed however that that it is “abundantly clear that the practice of manual scavenging continues unabated.”

Manual Scavenging Violates Laws and Constitution
India’s Constitution bans caste-based discrimination known as untouchability. The Protection of Civil Rights Act, 1955, prohibits compelling anyone to practice manual scavenging. In 2013, the Indian parliament enacted The Prohibition of Employment as Manual Scavengers and Their Rehabilitation Act (the 2013 Act) outlawing all manual excrement cleaning. The 2013 Act also recognized a constitutional obligation to correct the historical injustice and indignity suffered by these communities by providing alternate livelihood and other assistance.

In March 2014, the Supreme Court of India ruled that manual scavenging violates international human rights law. The court called for effective remedy. The new Indian government elected in May has pledged to address the needs of India’s marginalized communities, but has yet to take any new measures to end manual scavenging.

People who have left manual scavenging, even those who had the support of community-based civil society initiatives, report significant barriers to accessing housing, employment, and support from existing government programs. Notably, under the 2013 Act, rehabilitation provisions are left to be implemented under existing central and state government schemes – the same set of programs that have not thus far succeeded in ending manual scavenging.

To ensure that entitlements under the 2013 Act – including financial assistance, scholarships, housing, alternative livelihood support, and other important legal and programmatic assistance – are available to manual scavenging communities, the government should undertake a complete assessment and audit of all relevant schemes currently in place, Human Rights Watch said. The government should then work in consultation with communities engaged in manual scavenging and civil society organizations to create a comprehensive program that corresponds with the provisions of the 2013 Act.

“Caste-based custom, backed by coercion, is still binding people to manual scavenging, and that demands government intervention,” Ganguly said. “India’s new government has the means and an obligation to bury this rights abusing practice forever.”

For additional testimonies from the report, please see below.

Select Testimonies from the Report
“The first day when I was cleaning the latrines and the drain, my foot slipped and my leg sank in the excrement up to my calf. I screamed and ran away. Then I came home and cried and cried. I knew there was only this work for me.”
— Sona, Bharatpur city, Rajasthan, June 2013

“I clean in 20 houses. They give me roti [flat bread]. They don’t give more than two rotis, but they do give us something. My husband does farm work, but work in the fields does not come every day. If I do this work, at least we will have something to eat.”
— Shanti, Mainpuri district, Uttar Pradesh, January 2014

“I studied commerce and banking, but I couldn’t find work. Even though I am educated, the village council hired me to clean toilets because I am from this community.”
— Kailash Pokerji Kundare, Jalgaon district, Maharashtra, March 2014

“We went to the panchayat [local council] members and said, please give us some work. The work they gave, my work, was to clean the gutter, clean excrement from roads, clean the toilets, clean the village, and remove garbage. It is our caste. They will not give us any better work to do. Nothing that would give us dignity.”
— Gopal Harilal Bohit, Jalgaon district, Maharashtra, March 2014

“They called our men and said ‘If you don’t start sending your women to clean our toilets, we will beat them up. We will beat you up.’ They said, ‘We will not let you live in peace.’ We were afraid.”
— Gangashri, Mainpuri district, Uttar Pradesh, January 2014

“I had to work with my head veiled. During the rains, my clothes would become drenched with excrement. They would not dry. The house would smell. I started to get skin diseases and even to lose my hair.”
— Badambai, Neemuch district, Madhya Pradesh, January 2014

“The manual carrying of human feces is not a form of employment, but an injustice akin to slavery. It is one of the most prominent forms of discrimination against Dalits, and it is central to the violation of their human rights.”
— Ashif Shaikh, founder of Rashtriya Garima Abhiyan, a grassroots campaign to end manual scavenging, May 2014