The 21st of June has been marked as a global day of action to end caste discrimination and marches were carried out in London, Washington DC, San Francisco and India on this day. In London, a letter was presented to Prime Minister David Cameron, calling for action on enacting caste legislation in the UK, on caste-based rape and on endorsing the draft UN Principles and Guidelines for the Effective Elimination of Discrimination based on Work and Descent (UN P&Gs). In Washington DC protesters picketed outside the Capitol demanding that Congress pass a binding resolution mandating action by US agencies in caste-affected countries and asking the US Government to take action on caste discrimination by endorsing the UN P&Gs. In other cities, protesters marked their solidarity with the global march by gathering and marching with placards and holding speeches. 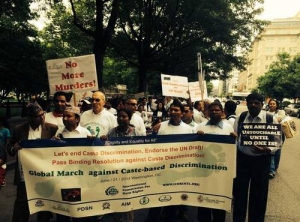 Press release from the Global March in Washington DC

Pictures from the Global March in Washington DC

Key demands by the many protesters from a wide-range of organisations in the US working to end caste-based discrimination and representatives from organisations in South Asia including Asha Kowtal of AIDMAM/NCDHR and in coalition with the Pakistan Dalit Solidarity Network and the Dalit NGO Federation in Nepal:

Information on the Global March in London

Pictures from the Global March in London

Key demands by the many protesters from a wide-range of organisations in the UK working to end caste-based discrimination:

A March lead by NACDOR was initiated in India