Get updated with IDSN’s October newsletter 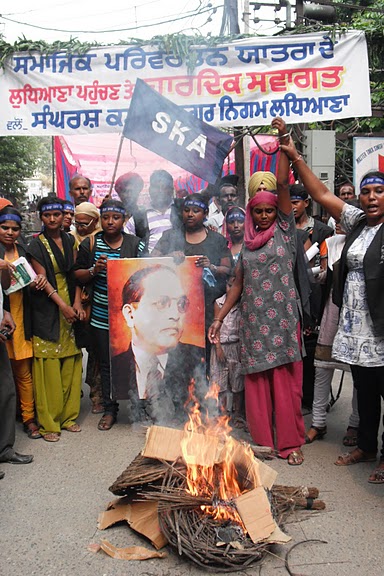 This month’s IDSN newsletter features information on Dalit issues from several caste-affected countries, including India, Bangladesh and Nigeria, as well as numerous stories with an international perspective.

Campaigners against manual scavenging burn a basket used for the reviled practice while displaying a poster of the revered Dalit leader, Dr. Ambedkar. Photo: SKA

US President Barack Obama’s upcoming visit, a major push from civil society to eliminate the banned practice of manual scavenging and continuing atrocities against Dalits all contribute to making India the logical focus of this month’s IDSN newsletter.

The National Campaign on Dalit Human Rights (NCDHR) and IDSN have written a joint letter to the US President, urging him to raise the issue of caste discrimination during his visit to India in November. Meanwhile, campaigners from all over the country are approaching New Delhi as part of a ’yatra’ (march) that aims to focus attention on the plight of manual scavengers.

The conviction of a Dalit youth for the murder of a female student has angered a number of Dalit organisations who believe that the young man is innocent. Also in India, a dog was declared ’untouchable’ by its owner because it had been fed by a Dalit woman, and prospective parents who seek fertility treatment are particularly concerned with the caste background of the egg donor or surrogate mother.

In Bangladesh and Nepal, Dalit organisations are seeking constitutional reforms to ensure a greater focus on Dalit rights. And an article on caste-based oppression in Nigeria demonstrates that this human rights issue is definitely not exclusive to South Asia.

On the international level, IDSN has written an open letter to the EU High Representative for Foreign Affairs and Security, Catherine Ashton, encouraging her office to pay more attention to the issue of caste discrimination. In Copenhagen, members of the IDSN board met the Danish Minister of Development, Mr Søren Pind. And in London, the exhibition ‘Being Untouchable’ featured some powerful images of the lives of Dalits.

You can receive the monthly IDSN newsletter straight to your inbox by subscribing here.