The International Service on Human Rights (ISHR) has released a new handbook on NGO access to the UN and the UN Committee on NGOs. The case of IDSN, whose application for UN consultative (ECOSOC) status has been unjustly deferred by the Committee for 7 years, is featured prominently in the book. An event to launch the book was held in Geneva where the IDSN Executive Director spoke on a panel alongside the ISHR and the Vice-President of the Human rights council. 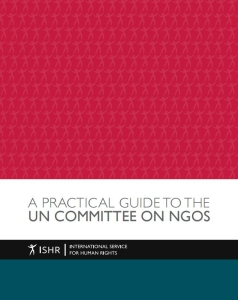 The handbook, A Practical Guide to the UN Committee on NGOs, is an honest account of the way in which the NGO committee functions and malfunctions, with helpful tips and useful insight. At the well-attended launch, hosted by the Permanent Mission of Australia to the UN in Geneva on 22 April, the Vice-President of the Human Rights Council said,

“The effective and active participation of NGOs in the Human Rights Council and its mechanisms is instrumental. We simply cannot fulfil the Council’s mandate without them … Yet, what is worrisome is the fact that according to the UN Special Rapporteur on Human Rights Defenders in his report to the HRC’s 27th session, several stakeholders have voiced concerns about the large number of deferrals and perceived lack of transparency in decisions on consultative status of NGOs.”

Swiss human rights expert and member of the ISHR Board, Jean-Daniel Vigny, also spoke at the launch suggesting the set-up of an international campaign to make more NGO friendly states join the Committee and introducing a 3-year limit to how long an application may be deferred in the NGO Committee.

IDSN Executive Director, Rikke Nöhrlind, presented the case of unjust deferral of IDSN’s application for ECOSOC status through the perpetual questioning from India for over 7 years saying that the denial of consultative status is blocking the work of IDSN at the UN and that IDSN’s application is the longest ever deferred by the Committee.

IDSN’s case and the issue of caste is also featured several places in the handbook and as a case study in chapter 5. The handbook highlights the statements of the UN Special Rapporteur on the exercise of the rights to freedom of peaceful assembly and of association, Maina Kiai, both in his report to the General Assembly (GA) and in his statement at the GA, where he criticized India for arbitrarily blocking the International Dalit Solidarity Network (IDSN) from obtaining UN consultative status calling it, “clearly unacceptable, wrong and unfair.”

Marta Mauras, Ambassador of Chile to the UN in Geneva and former Vice-Chair of the UN Committee on the Rights of the Child also spoke on the panel stating that,

“Too often we see objections presented year after year in the NGO Committee in the form of questions that challenge NGO applicants for ECOSOC consultative status … we believe the system needs strengthening by ensuring the UN is a space that guarantees the right to freedom of expression of ideas and opinions.”

Download the Practical Guide to the UN Committee on NGOs.

Excerpts on IDSN and caste from the handbook

Our application to #NGOCte has been the longest ever deferred, by questions asked by only one State, #India says @idsnupdates #NGOaccess

NGO Cte fails in its mandate bc. it discriminates against human rights orgs. in approach to applications says @eleanoropenshaw #NGOaccess