The Report of the UN Special Rapporteur on the exercise of the rights to freedom of peaceful assembly and of association to be considered by the UN General Assembly, highlights IDSN’s application for accreditation as an NGO with the UN (ECOSOC) and its continued deferral for seven years. 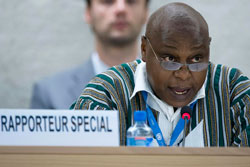 In the report, the Special Rapporteur launches a sharp critique of the functioning of the UN NGO Committee, tasked with recommending NGOs for UN accreditation status. Mr. Maina Kiai raises concern that the Committee is acting, “in a manner contrary to the spirit of resolution 1996/31,” on the consultative relationship between the United Nations and non-governmental organizations. With special reference to IDSN Mr. Maina Kiai notes that,

“The case of the International Dalit Solidarity Network, an international NGO focusing on caste-based discrimination and other forms of discrimination based on work and descent, is particularly troubling: since 2008, the Network has received 64 written questions from the Committee, all raised by India. It is now the longest pending application before the Committee”.

The NGO Committee recommends NGOs applying for consultative status to the Economic and Social Council members. This Committee is composed of 19 Member States: five from Africa, four from Asia, two from Eastern Europe, four from Latin America and the Caribbean, and four from Western Europe.

In the report, Mr. Kiai is concerned that the Committee has arbitrarily deferred applications for consultative status of NGOs. He mentions that 46 organizations working on human rights issues, such as children and women’s rights, minorities and country situations have had their accreditations repeatedly deferred.

Furthermore, the Special Rapporteur calls upon the UN to, “Reform the Committee on Non-Governmental Organizations to prevent Member States from blocking accreditation applications with perpetual questioning and to unilaterally vetoing applications. The reform process should be guided by the principle that the United Nations functions best when it is accessible to the greatest diversity of voices possible”

The Special Rapporteur furthermore called upon States members of multilateral institutions to,

“Publicly condemn all acts of reprisal by State and non-State actors against those engaging or seeking to engage with multilateral institutions” and to, “Refrain from unduly preventing NGOs from obtaining accreditation with multilateral institutions, arbitrarily withdrawing accreditations, or deferring the examination of periodic reports of accredited organizations.”

On a positive note, The Special Rapporteur praises Belgium, Chile, Mexico and Uruguay, among others, for their role in the NGO committee combating attempts by peer members to arbitrarily dismiss applications of NGOs.

Read the fact sheet on IDSN’s application for ECOSOC status

Read the International Service on Human Rights (ISHR) article on the Report of the SR, October 17 2014