Dalits in Pakistan suffer from severe drought – despite promises to act

1.2 million people and five million livestock in district Tharparkar are now once again in the grip of a severe drought and efforts to prevent future human catastrophies must be stepped up. 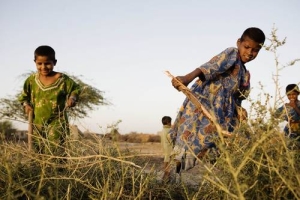 Earlier this year IDSN posted the article Drought in Pakistan kills over 100 children – many are Dalits calling for urgent and sustainable relief for Dalits residing in the Thar desert who are repeatedly struck by drought. While some relief did reach Thar, promises of planning ahead and finding sustainable solutions to avoid similar tragedies in future droughts remain unfulfilled.

In the newspaper article Drought in Thar: Some more broken promises Dr. Sono Khangarani, of the Pakistan Dalit Solidarity Network, says that 1.2 million people and five million livestock in district Tharparkar are now once again in the grip of a severe drought and that efforts to prevent future human catastrophies must be stepped up.

“Indeed, effective preparations and social safety nets, supported by policies grounded in an understanding of drought can mitigate some of the effects of drought. Policies must prioritise the health and nutrition of children; establish systems for early warning, equitable distribution of relief for humans and livestock, ensuring water security in the specific environmental context of Thar; and a rigorous monitoring and accountability mechanism.

Unfortunately, in Tharparkar, this planning is lacking. After the last severe drought hit Tharparkar in 1999 and 2000, despite promises and pledges to the contrary; both the public sector and civil society failed to live up to their words, with the Thari people ultimately paying the price.

This time, we have no excuse to ignore the way forward and must re-affirm our commitment to end drought emergencies through a sustainable long-term approach that ensures every step will be taken to support the people of Thar. This will require close coordination, initiative and engagement from both the myriad of NGOs working in the area, and government departments.

Unfortunately, as the people of Thar have witnessed all too often, failure to do so can result in catastrophic human and environmental tragedies.”

As many of those residing in the Thar desert are Dalits it is important to incorporate tools addressing caste-based discrimination into relief efforts and into forward planning for future droughts. The IDSN report Equality in Aid – offers recommendations to this end.

The Asian Human Rights Commission have also issued the urgent appeal: Pakistan: A call to save the people of Tharparker and surrounding desert areas from the acute drought.