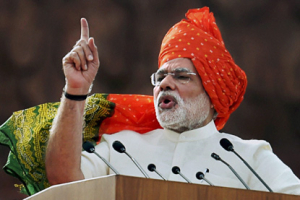 “Brothers and sisters, for one reason or the other, we have had communal tensions for ages. This led to the division of the country. Even after Independence, we have had to face the poison of casteism and communalism. How long these evils will continue? Whom does it benefit? We have had enough of fights, many have been killed. Friends, look behind and you will find that nobody has benefited from it. Except casting a slur on Mother India, we have done nothing. Therefore, I appeal to all those people that whether it is the poison of casteism, communalism, regionalism, discrimination on social and economic basis, all these are obstacles in our way forward. Let’s resolve for once in our hearts, let’s put a moratorium on all such activities for ten years, we shall march ahead to a society which will be free from all such tensions. And you will see that how much strength we get from peace, unity, goodwill and brotherhood. Let’s experiment it for once.”

With a similar wording the President of India repeated these sentiments in his Ambedkar memorial speech on 4th September stating that:

“It is a reality, however that despite all the achievements in which we can take legitimate pride, our democracy continues to face many challenges. Large number of Indians still live in poverty, deprivation and want. Casteism too sadly remains a phenomenon we are yet to wipe out from our country and society… We must ensure that untouchability or any form of disability based on caste, creed, religion or sex is not practised in any part of the country. It is only through these endeavours can we occupy our rightful place in the leading ranks of the comity of nations.”

While Dalit rights activists welcome expressions of engagement to end caste-based discrimination and violence, questions have been raised as to why Modi would only urge the country to undertake a ten year moratorium on casteism – not a permanent one. It also remains to be seen what Government initiatives may be launched to support such developments. Sweeping statements on ending caste-based discrimination have been given before by Indian heads of state, while implementation of these intentions has been severely lacking on the ground, also in Gujarat while Modi was in charge of the state.