A 28 year old Dalit human rights defender, Mr. Poovarasan, was abducted from his house by five police officers in Tamil Nadu, and brutally tortured and abused using derogatory caste names. Following the abuse, the police filed false charges against him. Unable to walk, the victim was taken to court in an ambulance, and the Police inspector forced the ambulance with Mr. Poovarasan in it to drive off the court premises, while he threatened Mr. Poovarasan to remain silent about the assault. An urgent appeal has been launched to ensure proper medical treatment for the victim and consequences for the involved police officers. 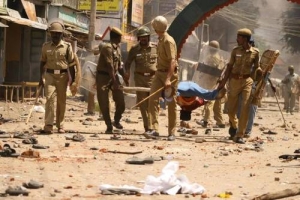 The urgent appeal case details the brutal beatings that Mr. Poovarasan was subjected to and is a report of the entire incident including the intervention from advocates from the human rights organisation that Mr. Poovarasan worked for, Makkal Mandram, to ensure that the case was registered and medical exams undertaken. A model appeal to be filled out and adapted by organisations and individuals has been created.

Human Rights Watch research has identified various patterns of atrocities by police officials. More than 60% of the victims of torture belonged to SCs and religious minorities. Custodial torture and deaths, encounter deaths, raids on Dalit colonies after inter-caste clashes, violence against Dalit women, false arrest of Dalits, violence to crush peaceful protests by Dalits; violence against entire Dalit colonies while searching out a Dalit accused.