In an effort to raise global awareness and engagement on the issue of caste-based violence and discrimination, particularly against Dalit women, a group of Dalit women leaders have toured through Germany and the United States this past month with more tour dates coming up. The women are using visual storytelling through photographs and videos, participating in seminars and engaging on social media via #dalitwomenfight to bring their message to an international audience. 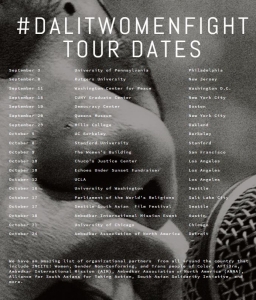 After the success of the Dalit Women’s Self-Respect tour in 2014 in India, a number of Dalit female activists have come to the United States highlight struggle of Dalit women in seeking justice and “breaking the silence on the epidemic of caste based sexual violence.”

The North Ameican tour features Dalit rights activists Manisha Devi, Sanghapali Aruna and Asha Kowtal. The tour also includes a photo exhibition by New York-based artist Thenmozhi Soundararajan. These women have been involved in the Dalit women’s self respect marches that have been taking place in India throughout 2014 and also in 2015. The organisers write on their website:

“The Dalit Women’s Self-Respect movement is India’s largest historic challenge to caste-apartheid and caste-based sexual violence. In 2014, Dalit women and activists who have had enough of India’s epidemic of caste violence, jumped into jeeps, cars, bikes, and rickshaws and traveled state to state in the largest freedom ride to demand an end to caste based violence in Indian history. At each stop activists comforted survivors, confronted perpetrators, and called out corrupt public officials and the State who are responsible for this violence. As a result of our organizing, the conversation of India’s failure to implement the rule of law for all has spread to over 50 cities in the last year alone

A national delegation of field organizers working on the front lines to end caste apartheid are in the U.S. this September and October seeking justice for Dalit women, by breaking the silence on the epidemic of caste based sexual violence.

Join the Dalit Women’s Self Respect Movement on this historic delegation, where these activists working on a transnational grassroots campaign to end caste based patriarchy will speak further on their demands to India and collaborators across the world to implement the rule of law for all and an end to the impunity faced by Dalits.” 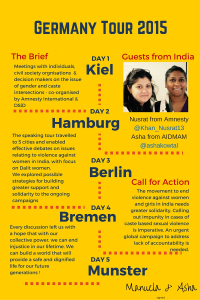 According to the organisers the facts shared with German students and other people in the five different cities visited shocked many in the audience but also spurned solidarity among the listeners who wished to support the struggle.

“In the past decades we have been lobbying so much on different levels, we have been speaking to so many decision makers – be it in European countries, be it EU, be it at UN level”, Asha Kowtal from AIDMAM said, “I feel it is time to explore new approaches A global movement is needed to make a change, to bring pressure about decision makers. We have to make more contact with these interested people in your countries who are prepared to be part of our global movement,” Asha concluded.