In a recent episode of his popular talk show, Satyamev Jayate, the actor Aamir Khan focused on caste discrimination and declared it a ‘mental illness’. 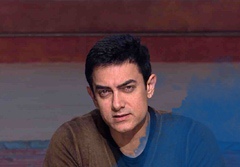 If you’re a Dalit activist, gaining access to India’s leading politicians is not easy. If you’re a popular Bollywood superstar speaking up for Dalit rights, it may be a different story – as demonstrated by a meeting between the famous actor, Aamir Khan, and Prime Minister Manmohan Singh on 16 July.

The two men discussed the illegal and inhuman practice of manual scavenging, and the Prime Minister assured Mr Khan that he would look in to the issue on a priority basis. More than a million Dalits are thought to be working as manual scavengers throughout India, even though the practice has long since been banned.

A week or so prior to the meeting, one of India’s leading campaigners against manual scavenging, Bezwada Wilson, had been a guest on Aamir Khan’s television show, Satyamev Jayate (“Truth alone prevails”). The show has become hugely popular by focusing on India’s painful social problems, and this particular episode aired some uncomfortable truths about caste discrimination and ‘untouchability’.

It featured a number of Dalits, including a university professor who spoke movingly about the discrimination she has faced all her life, prompting Aamir Khan to address the following remark at his audience: “If I think that I am higher than you because of birth, then I am mentally ill”.

Another guest, the activist filmmaker Stalin K, showed scenes from his award-winning documentary on caste discrimination, ‘India Untouched’. He congratulated Khan on highlighting the issue of ‘untouchability’ before a national television audience, saying that “it has taken us 65 years to bring the subject here.”

In a subsequent interview with Associated Press, Stalin K acknowledged that Khan’s show does not necessarily raise new issues, but that “the conversations are much deeper.” He added that “this amount of discussion in such a short amount of time is unprecedented.”

Others have focused on the potential impact of Bollywood actors on social issues. Mari Marcel Thekaekara, a journalist who has reported extensively on the plight of Dalits, noted on her blog that Khan’s show “touched a raw nerve”.

“Aamir exhorted India to fight untouchability and discrimination. I think if we started a national campaign now, with Bollywood actors on board, it could make a radical difference to the direction India takes,” she wrote.