The Chairman of the National Human Rights Commission in Bangladesh, Mr Mizanur Rahman, urged the Government to be more generous in protecting the rights of Dalits at a press conference jointly organised by the Bangladesh Dalit Parishad (BDP) and the Manusher Jonno Foundation (MJF). 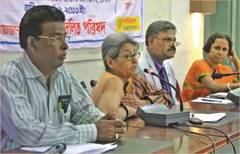 General Secretary of the BDP Ashok Das presented a 12-point charter demanding a new act to eliminate racial discrimination and implementation of the Government’s electoral promise to include Dalits in the development process. He also demanded that there should be a special ‘cell’ for Dalits in the NHRC and the Ministry of Women and Children Affairs, that ‘untouchability’ practices should be made punishable crimes and a quota system for Dalits should be invoked reserving seats in Parliament for Dalits and school enrolment for Dalit children.

Mr Rahman upheld that the constitution of Bangladesh already protected the fundamental rights of all people of the country and that the state should ensure that all human beings are treated as equals with equal rights.

Human Rights activist, Hamida Hossein, said that Dalits should create pressure on the Government to ensure that Section 27 to 29 of the constitution stating that all citizens have the same human rights are implemented.

A representative from the Bangladesh Dalit and Excluded Rights Movement (BDERM) and other Dalit activists and leaders attended the meeting and Mr Rahman will attend a BDERM event on the 21st March in connection with the International Day for the Elimination of Racial Discrimination.