The Dalits of Bangladesh are deprived of access to water, sanitation and hygiene (WASH). A new report urges to country’s government to take action on the issue and civil society groups to pay more attention to the needs of the Dalit population.

Clean water is a luxury for the Dalits of Dhaka. While members of the Bangladeshi capital’s non-Dalit population mostly boil or filter their water, the economically deprived and discriminated Dalits often have to make do with unsafe water sources. 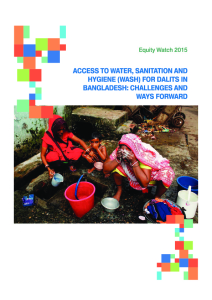 “We are lucky to have some source of water; hygienic or unhygienic, is not for us to think”, says Dalit rights activist Sonu Rani Das in a recent report on access to water, sanitation and hygiene (WASH) for Dalits in Bangladesh.

The situation in her ‘colony’ – a term for the areas that most Dalits live in – is but one example of the numerous problems that the estimated 5,5-6,5 million Dalits of Bangladesh face in their daily lives. They live in abysmal conditions, often in unclean locations with overflowing or choked drains, open sewers, lack of latrines and bathrooms, and near garbage dumping sites.

Discrimination against them manifests itself in difficulties in accessing equal water and sanitation services. In rural Bangladesh, 89 per cent of Dalits use shared latrines, mostly without roofs. In urban Dalit colonies, 84 people, on average, have to share one water point, while there is one latrine per 40 people.

The report – produced by the Bangladesh Dalit and Excluded Rights Movement (BDERM) and human rights NGO Nagorik Uddyog – notes that numerous measures by the Government of Bangladesh to improve water and sanitation services for the general population in urban as well as rural areas have had little effect on the country’s Dalits. “This is to a large extent because recognition of Dalit issues is yet to evolve fully,” it says.

The report presents a number of recommendations to the government. These include adopting a law on anti-discrimination; taking action to ensure ‘adequate and discrimination-free access to water and sanitation facilities’ for Dalit households; the targeting of Dalit colonies to improve WASH facilities; and addressing the ‘various physical, cultural, economic and social barriers’ Dalits face in accessing WASH services.

Other recommendations are directed at civil society organisations. They should ‘increase interaction with the Dalit population’; empower and build capacity of Dalits and their organisations in advocating for WASH facilities; and form WASH task forces to identify Dalit needs in this area.