A disturbing number of alleged hate crimes – including assault, rape and murder – were reported in 2018 against people from marginalized groups, especially Dalits and Muslims, said Amnesty India, as it released data recorded on its interactive website, ‘Halt the Hate’. “The first step to ensuring justice and ending impunity for hate crimes – where people are targeted because they belong to a particular group – is to highlight their occurrence,” said Aakar Patel of Amnesty India. 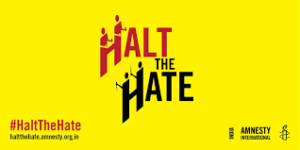 “Unfortunately, the true extent of hate crimes in India is unknown because the law – with some exceptions – does not recognize hate crimes as specific offences. The police need to take steps to unmask any potentially discriminatory motive in a crime, and political leaders must be more vocal in denouncing such violence.”

“Legal reforms that enable recording of hate crimes and strengthen accountability must be a priority for any government that comes to power following the upcoming general elections.

“Despite the welcome directions issued by the Supreme Court of India last year to deal with cases of targeted mob violence, these incidents seem to have continued with alarming impunity.”

On 17 July 2018, the Supreme Court of India, responding to a petition regarding violence by cow protection groups, described mob lynchings as “an affront to the rule of law and to the exalted values of the Constitution itself”. It further directed states to put in place certain preventive, remedial, and punitive measures to combat mob violence. According to civil society groups, the implementation of these guidelines has not been adequate.

See the findings of the survey here