Abuses against Dalits are listed among several pressing human rights concerns in an open letter from Amnesty International USA to US President Barack Obama on the eve of the Indian Prime Minister’s state visit to Washington. 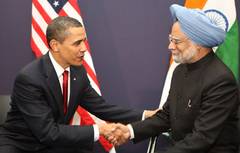 President Obama is being urged to address abuses against Dalits when he meets Prime Minister Singh next week.

Amnesty International USA has urged President Obama to address caste discrimination and several other human rights concerns during his meeting on 24 November with the Prime Minister of India, Manmohan Singh.

The letter from AI USA Executive Director Larry Cox calls on the US President to “candidly address human rights concerns in India during your upcoming meeting” with the Indian Prime Minister and “to press him to make substantive improvements”.

Regarding the plight of India’s nearly 200 million Dalits, AI USA states that the caste system has been called India’s “hidden apartheid” and lists numerous forms of abuses committed against them.

The abuses include “parading of naked Dalit women through the streets, socioeconomic discrimination, killings, arson-burning of Dalit communities, gang rape, bonded labor, denial of land rights, and many more.”

The letter also accuses the Indian police and criminal justice system of discriminating against Dalits and states that “though important strides have been made, much remains to be done.”

Among the several other human rights abuses mentioned in the open letter are mass killings of Sikhs and Muslims, the Bhopal chemical disaster and discrimination against “Adivasis”, India’s indigenous communities. Larry Cox makes the following appeal to President Obama:

“Mr. President, we urge you not to miss this opportunity to speak for those whose rights have been violated in India. They need your help.”