Two Dalit representatives from India and one from Nepal joined their IDSN colleagues in Brussels last week to inform European Union officials about the nature and scale of caste discrimination in South Asia. 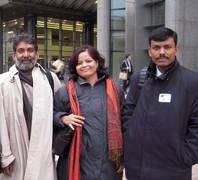 The audience in the meeting room kept completely quiet while a short documentary, depicting manual scavenging and other harsh realities of the lives of India’s Dalits, was being shown on a screen. Some of the viewers appeared to be slightly uncomfortable, others looked moved.

The occasion was a briefing for members of COASI and COHOM, the two EU working groups responsible for relations with Asia and human rights respectively. During a one and half hour session, Dalit representatives Paul Divakar and Manjula Pradeep (India) and Bhakta Bishwakarma (Nepal) joined forces with IDSN coordinator Rikke Nöhrlind to explain the nature and scale of caste discrimination in South Asia.

The overall purpose of the briefing and the Brussels visit was to explore how the EU can address this form of discrimination in its interaction with caste-affected countries in South Asia and elsewhere. This includes development cooperation, trade relations and political dialogues.

The delegation also urged the EU to take the issue further at the European Council level and to continue its support within the UN framework where caste discrimination has been addressed with increasing intensity in recent months.

During its two-day stay in Brussels, the delegation also met with officials from the European Commission and members of the European Parliament. The latter institution adopted a resolution in 2007 in order to focus more attention on the human rights of India’s substantial Dalit population, estimated to be close to 200 million.

Manjula Pradeep is the Executive Director of Navsarjan, a Dalit human rights NGO in Gujarat

IDSN study on caste discrimination in South Asia (2009, commissioned by the EU)