Despite efforts to curb child slavery in India’s spinning mills the practice continues and 60% of the victims are Dalits – says newly released report. 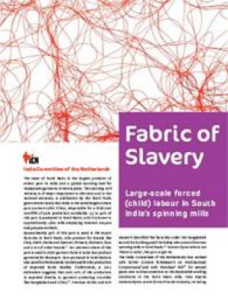 The India Committee on the Netherlands (ICN) report  ‘Fabric of Slavery – Large-scale forced (child) labour in India’s spinning mills’ shows that various forms of modern slavery, including child slavery, are found in more than 90% of the spinning mills in South India. These spinning mills produce yarn for Indian, Bangladeshi and Chinese garment factories that produce garments for the Western market.

In the press release issued by ICN it is stated that the majority of those working under these conditions are Dalits or ‘outcastes’ – who are enslaved by employers who may withhold their wages or lock them up in company-controlled hostels. They may work long hours, face sexual harassment and may not earn the minimum wage.

“We have raised the issue for five years now, but even to us the scale of this problem came as a shock,” said Gerard Oonk, director of ICN in the press release.

Researchers in South India spoke to workers in 743 spinning mills in Tamil Nadu, almost half of all the mills in the region. The majority of the women working in those mills are between 14 and 18 years old; 10 to 20% are even younger. Almost half of the researched mills have a so called ‘Sumangali Scheme’, where a significant part of worker’s wages is withheld until they have completed their contract.

Over the past many years IDSN has continued to bring attention to the problem of Dalit girls working as Sumangali workers. IDSN has worked to promote the findings in previous ICN reports, as well as to bring attention to this in the UN and EU and with garment producers at the international level. This was also a key topic at the UN side-event on Caste and Gender-Based Forced and Bonded Labour where the UN Special Rapporteur on contemporary forms of slavery addressed the linkages between caste, gender and slavery.

The Special Rapporteur referred to the increased vulnerability to contemporary forms of slavery of people belonging to lower castes being exacerbated by intersecting gender discrimination to create a “vortex of continuing economic disadvantage, and political disempowerment”.

On 15 September 2016 the UN Special Rapporteur on Contemporary Forms of Slavery, Urmila Bhoola, presented her annual report to the Human Rights Council, focusing on global trends of debt bondage, reflecting the information received from a range of stakeholders. Dalit Solidarity Network -UK and their partner READ (Rights Education and Development Centre) made a submission to the report, sharing their first-hand knowledge of addressing the issue of debt bondage and forced labour of children, in particular, under the sumangali scheme.

While some progress has been made, It is clear that much more action needs to be taken and the report offers key recommendations for how to eliminate slavery in the industry to the spinning mill industry, International buyers/brands, governments in importing countries, the government of India, the Tamil Nadu state government and district government

According to ICN, advocacy and action on ‘Sumangali schemes’ by NGOs, unions and brands has contributed to reducing the incidence of such schemes, but has not tackled the issue of modern slavery in all its dimensions. Multiple factors contribute to this failing including: the poor enforcement of labour laws, the power of the industry, superficial audits by buying brands and lack of initiatives that increase joint leverage of brands. A few mills, often under pressure from their Western buyers, have addressed labour concerns in cooperation with local organisations. To sustain and upscale those successful initiatives, brands and governments from importing countries should use their collective leverage to tackle this structural form of slavery in co-operation with the central and state governments, the industry and local trade unions and NGOs.

The report received wide publicity, including though publications in the national Indian newspaper The Hindu and a globally published article by Reuters. Also various fashion websites published articles on the report and the global garment brand C&A responded. In the Netherlands parliamentary questions were raised after publication of the report.