UN: Plight of Dalit women highlighted by the Special Rapporteur on Violence against Women

“The intergenerational nature of caste-based discrimination condemns women to a life of exclusion, marginalization and disadvantage in every sphere of life. Many of those women are denied an education and economic opportunities, and perform dangerous and unprotected work, including … modern forms of slavery,” stated the SR on Violence against Women, Ms. Rashida Manjoo, in her report following her mission to India. 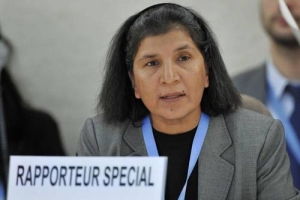 Ms.  Rashida Manjoo, will be presenting two reports at the 26th session of the Human Rights Council (June 2014) – one from India and one from Bangladesh.

The report on India furthermore finds that redress for Dalit women victims of violence is very limited and that multiple discrimination is a significant barrier to access to services stating that,

“Numerous allegations were made of de facto caste-based discrimination, perpetrated by police officers, public representatives and community members, with regard to access to services.”

The report also highlights that Dalit women engage in dangerous and unprotected work such as manual scavenging and that,

“While legislation has been adopted to eradicate bonded labour and manual scavenging, reports and interlocutors indicate that there is a consistent failure in the implementation of such laws and a tendency to minimize the significance of the problem.”

In the report on Bangladesh Ms. Manjoo finds indications of “… high levels of violence against women from religious and ethnic minority communities, with Dalits, Hindus and indigenous groups most at risk.”

Report by the SR on Violence Against Women on Bangladesh(A/HRC/26/38/Add.2)

Document of caste references in both reports

Statement from the UN Special Rapporteur on violence against women (2013)