Thousands of Dalits protest over attacks and discrimination in Pakistan

In a mass protest 15,000 Hindus, the majority of them Dalits, marched through the streets of Karachi to push for the provincial Government of Sindh in Pakistan to meet their demands for provisions to stop escalating discrimination against Hindus in the region. 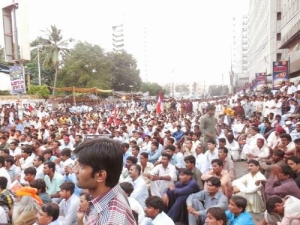 The protest was sparked by the murder of two Hindu traders in Umerkot, from the marginalised Malhi community. The murders followed a string of attacks on non-muslim communities in the form of murders, kidnappings, forced conversions and attacks on places of worship. The protest was led by Mr. Lal Malhi, a member of National Assembly of Pakistan on seats reserved for minorities.

Umerkot, where the non-Muslim population is in the majority, is increasingly becoming a hub of targeted attacks against the Hindu community. Frequent murders, kidnappings and forced conversion of Hindu women are leading to mass exodus of the local population from the area. During last year’s general elections, the Hindu Community yet again faced threats from the powerful elements out to usurp our right to vote. There is neither any special attention to the threat against the local community nor have the provincial and the federal government taken any measures to address the concerns of the local population.

The demand paper presented by the protesters to the Government included a number of key actions to be taken to end the discrimination and attacks lodged at scheduled caste Hindus and other minority groups in Pakistan. The paper included reference to paying particular attention to the plight of scheduled caste Hindus in Sindh, as they are an especially vulnerable group being discriminated against. Protesters also demandedan urgent investigation into the ongoing humanitarian crisis in the Thar desert to address the social, economic and political root-causes of the issue in order the bridge the growing discontent in the region.

The protesters furthermore urged the government to implement the landmark verdict of the Supreme Court of Pakistan announced in May 2014, in which the apex court has asked the government to constitute a National Council for minorities’ rights, to form a Special Police Force for the protection of worship places of minorities and remove hate material from the curriculum. They demanded that measures be taken to implement all the recommendations including enforcement of the relevant policy directives regarding reservation of quota for minorities in all the government services.

The government also assured in writing that no punitive measure would be taken against the protestors and organizers for staging a demonstration in Karachi. Following the signing of the agreement, the protest was disbanded with a promising outcome to be followed up. There were 15,000 who protested – 80% of them were Dalits, according to the Pakistan Dalit Solidarity Network (PDSN).

Read the demand paper presented to the Sindh Government