The SR on Minority issues completed her visit to Sri Lanka 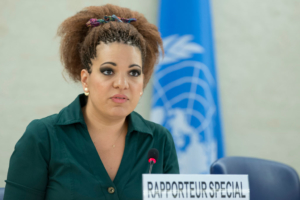 The UN Special Rapporteur on Minority Issues, Rita Izsák-Ndiaye, just completed her official 10 days visit in Sri Lanka. In her statement on 20 October, the SR urged the government to take concrete steps to protect Sri Lanka’s minorities. She noted that there were “remaining challenges” within Tamil and Muslim communities, including return of occupied land, missing persons, demilitarization, release of security-related detainees, poverty, violence and discrimination against women, and caste-based discrimination.

She was concerned about the lack of protection of “up-country Tamils” who live in the central highlands. They face hardship, poverty, and ‘all their socio-economic and health indicators are much below the national average, including infant mortality rate, literacy or access to water’. In addition to that, they are subject to caste discrimination from the rest of the community in their access to employment and services.

Lower‑caste groups within the Sinhala system suffer extreme poverty, low levels of education and continue to be pressured to perform hereditary caste occupations, such as removing dead animals and dirt. Low-caste groups within the Sri Lanka Tamil caste system have been disproportionally displaced in the Jaffna peninsula, due to war and the 2004 tsunami. She highlighted that low-caste groups in Sri Lanka, as well as other countries in South Asia, suffer ‘from acute caste discrimination throughout all the phases of disaster response, from rescue to rehabilitation’ and are most affected by climate change.

The Special Rapporteur will present her detailed report of the visit in March 2017.