IDSN press release: After travelling thousands of kilometres through 18 Indian states, the Maila Mukti Yatra – a march to eradicate manual scavenging – concluded today with an event in New Delhi. The attendance by high level officials from the Government of India as well as the United Nations is a measure of the Yatra’s success. 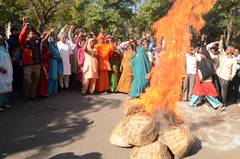 At the beginning of the Yatra, baskets used for manual scavenging were burnt to symbolise the liberation from this inhuman practice.

Copenhagen (IDSN), 31 January 2013 – Thousands of former and present manual scavengers gathered in New Delhi today to mark the end of their long march to eradicate this inhuman practice. Manual scavenging is officially banned in India, but hundreds of thousands of mainly Dalit women are still forced into this form of caste-based slavery.

On the final day of the Yatra, a number of liberated manual scavengers shared their experiences of the march. The culmination programme was attended by three ministers who promised that the Government of India would allocate more funds for the welfare and rehabilitation of manual scavengers.

Other high ranking Indian officials as well as representatives from a number of United Nations agencies were also present at the event. The UN High Commissioner for Human Rights, Navi Pillay, issued a strong message of support to the organisers and participants of the Yatra.

The Maila Mukti Yatra started in Bhopal on 30 November 2012 and has since then covered 18 different states. Its overall aim is to eradicate the practice of manual scavenging, a very serious form of caste discrimination which forces mainly Dalit women to clean dry latrines with their bare hands. Furthermore, the Yatra calls for stronger legislation against manual scavenging to be adopted and implemented, and for the socio-economic rehabilitation of former scavengers.

The International Dalit Solidarity Network strongly supports the aims and demands of the Maila Mukti Yatra. On the eve of the conclusion of this important and impressive march, IDSN sent a message of solidarity to the organisers and participants, praising their courage, dedication and vision and warmly congratulating them on the impressive results achieved.

“You have liberated thousands of manual scavengers and directly reached 50,000 victims of this inhuman and degrading form of caste-based slavery. You have managed to involve large segments of civil society in the struggle against manual scavenging, and your cause has attracted national and international attention. You have conveyed a strong message of hope, not only to manual scavengers, but to millions of Dalit people trapped in forced and bonded labour all over South Asia. May the Government of India and other governments listen to – and act upon – this message,” the organisation said.

The manual scavenging issue has recently been on the agenda in the UN as well as the EU. In September 2012, the UN Special Rapporteur on the human right to water and sanitation, Ms Catarina de Albuquerque, expressed grave concern about the extreme forms of social exclusion faced by manual scavengers and sweepers, even within their own caste. “These practices are not only deeply rooted in society, but also institutionalised through State practice, with municipalities themselves employing sweepers,” she said.

In December, the European Parliament adopted a resolution on caste discrimination in India, calling on the Indian Parliament to pass the proposed new law prohibiting manual scavenging and securing the rehabilitation of manual scavengers. It also urged the Indian Government to ensure that the law is properly implemented.

Petition to the Prime Minister of India to end manual scavenging

The disgusting stench of incredible India (article in Tehelka)

Sh*t, caste and the holy dip (opinion piece in The Hindu)