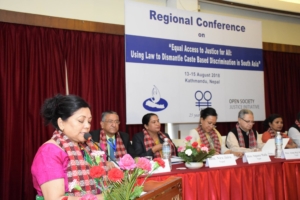 There were national human rights practitioners and advocates from the region, key state champions and regional actors to highlight the state and national efforts to advance the rights of Dalit and marginalized communities. The practitioners shared their experiences, examples of how organizations and coalitions are implementing wide-ranging changes to advance justice, and discuss ways that legal advocates and community partners can collaborate across organizations and coalitions to forge a way forward. Participants released a declaration from the conference and a report has also been produced. The conference took place from 13-15 July.

Read the full declaration below:

Kathmandu Declaration on Equal Access to Justice for All: Using Law to Dismantle Caste Based Discrimination in South Asia

1)      We, the National Human Rights Institutions, Civil Society Organizations of South Asia and Human Rights Organizations and Dalit Rights Movements from the continents of Asia, America and Europe (Bangladesh, India, Moldova, Macedonia, Nepal, Pakistan, Romania, UK and USA)  have come together in Kathmandu on 13-15 August, 2018, at the Regional Conference on Equal Access to Justice for All: Using Law to Dismantle Caste Based Discrimination (CBD) in South Asia to express our solidarity in calling upon all the organs of the State and inter-State bodies regionally and globally to end the caste and gender based discrimination and untouchability perpetrated against the communities affected by this systemic and heinous crime and to work for their development and progress within the parameters of equality, justice, equity and inclusion.

2)      Recalling the terms of the Universal Declaration of Human Rights according to which all human beings are born free and equal in dignity and rights and are entitled to the rights and freedoms therein without distinction of any kind, including race, colour, ethnicity, sex, sexual orientation, gender identity, disability, language, religion, social origin, birth or other status;

4)      Taking note that Dalit and similarly marginalised communities remains socially and economically vulnerable, politically and educationally excluded and disempowered and continue to suffer from access to justice, marginalization and economic deprivation across the world, mainly in South Asia;

5)      We recognize caste and gender based discrimination as one of the worst forms of discrimination in the world. Within the international discourse, particularly in UN Systems, caste-based discrimination is referred to as Discrimination based on Work and Descent (DWD).We further believe that promoting peaceful just and inclusive societies is possible by providing access to Justice for all and the accomplishment of the Sustainable Development Goals No. 5,10,16 and others adopted by the United Nations General Assembly (UNGA) in September 2015 is largely dependent on effective, inclusive and accountable justice systems and institutions.

6)      Dalit women are amongst the most marginalised people in the world. The caste hierarchy and patriarchal structures multiply alienate Dalit Women on the basis of class, caste,age, disability and LGBTIQ. While Dalit women experience high levels of physical and sexual violence, their vulnerability is largely a result of socio-economic deprivation, cultural and political exclusion.

7)      We recognize that DWD/CBD affects millions of people mainly in South Asia and worldwide. It violates a wider range of civil, political, economic, social, cultural and religious rights;

8)      We are aware that there remain constitutional, legislative and institutional gaps in protecting and promoting the rights of Dalits and Dalit women;

9)      We are mindful that the lack of equal access to justice for all, particularly Dalit women, children, people with disabilities hinder their overall development and well-being;

10)   We are concerned that lack of adequate and effective accountability measures and redressal mechanisms at the local, regional and global levels impede full enjoyment of human rights by all due to CBD;

11)   We stand in support and solidarity for the effective implementation of the UN OHCHR Guidance Tool for Elimination of Discrimination based on Work and Descent (DWD);

13)   To prioritize and arrange for DWD Desks and to give representation to the DWD/CBD communities at the National Human Rights Institutionsand proactively address such human rights violation cases;

14)   To make necessary arrangements for mechanisms and institutions to address all cases of violence and discrimination against Dalit women;

15)   To ensure that UN Sustainable Development Goals (SDGs) identify Caste and DWD as a system which excludes communities and, therefore, make proactive measures to address DWD and caste and gender based discrimination across targets with necessary indicators;

16)   To urgently adopt the Draft Principles and Guidelines for the Elimination of Descent and Work based Discriminationwhich was prepared and recommended by two eminent Special Rapporteurs appointed for this purpose and which still awaits the UN Human Rights Council’s formal recognition and approval;

17)   To call for a UN Declaration and/or Convention for combating discrimination on work and descent and caste discrimination and establish a Special UN Fund to support representatives of those communities from across the globe to participate in all UN processes on behalf of the community.

19)   To give due recognition to the rights of the growing population of DWD/CBD affected children and youth, plans specially designed development projects that are relevant to their needs today and accordingly allocatesufficient budgets,

20)   To take urgent steps to fulfill the commitments made by the Busan Partnership for effective Development Cooperation on Promoting Sustainable Development Goals in situations of conflict and fragility by donors;

21)   To invest more in legal empowerment to build the capacity of Dalit community Paralegals, particularly Dalit women for the consistency and quality of their efforts;

22)   To build and strengthen legal frameworks and enforcement of justice systems and administration of justice and implement available laws on access to justice for women and people facing DWD/CBD;

23)   To encourage sub-national governments to make SDG Goals No. 5,10,16 and others a development agenda and codify SDG 16 in plans and programmesto uplift the Dalit community, in particular Dalit women;

24)   To promote community-based justice services including institutionalization of the paralegal services and introduce provision of emergency funds from the governments to enable victims of DWD/CBD and domestic violence to access justice;

25)   To document good practices from past or ongoing initiatives on access to justice for all within South Asia and across the world, collect disaggregated data with safeguards for misuse of such data for policy interventions;

27)   To promote new technologies and approaches in the elimination of caste based discrimination, implementation of laws and connecting the larger populations in South Asia and across the world and between countries;

28)   Toaccelerate global efforts towards dismantling caste based discrimination in all its manifestations and criminalizing such discriminations with stronger penalties and creating basket funds for providing legal support to the victims;

29)   To ensure security of Dalit community in particular inter-caste marriages;

30)   Take up measures for political participation and strengthen Capacity development initiatives for Dalit and DWD communities;