The symposium “Challenges to effective legal remedies for Dalit and Minorities’ defenders in Pakistan and proposed solution to those challenges” was organised in Pakistan to discuss and launch the Pakistan report of the Dalit Justice Defenders Reports – an initiative by the International Commission on Dalit Rights (ICDR). Participants and speakers discussed issues of Pakistani Dalit rights defenders and lawyers and recommended pathways to improve access to justice for Dalits in Pakistan. 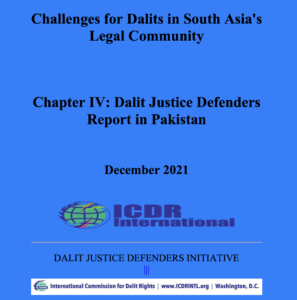 In the opening remarks, President of ICDR, DB Sagar, said the purpose of the release of this report in various countries is to mobilise legal communities in South Asia around the issue. The three first chapters of the report have been released consecutively in Nepal, India and Bangladesh.

“The Pakistan report highlights challenges, discrimination and harassment experienced by Dalits defenders and  lawyers and it also guides on how to reform the justice system and mechanisms in the country,” said the author of the Pakistan report, Pirbhu Satyani.

Mr. Satyani explained that Dalits have less representation in higher or influencing positions particularly in police, judiciary and criminal courts in Pakistan. In South Punjab, despite having a large Dalit community, there is no lawyer or Dalit Judge from this community. The role of the police is not supportive and Dalits face difficulty to register a first information report (FIR). In the province of Sindh, there is a small number of Dalit lawyers and defenders who have shared their stories of facing discrimination, biased treatment and negative remarks about their caste.

Speaking on the access to legal remedies, Mr Satyani shared the major finding of the report is that most of the time lawyers avoid taking cases involving Dalits for the reason that Dalits are poor and can’t pay their fees.  Sometimes it was also found that lawyers feel pressure from the other party in cases of forced conversion, forced marriages or blasphemy. Sometimes, if Dalit or minority lawyers take the case of a Dalit, they work behind Muslim lawyers to protect themselves from any threat or conflict.

Mr. Satyani says the report suggests some key recommendations, which include restoring 6 % job quota for the Scheduled Castes (Dalits) and taking initiatives to create space for Dalits in civil services, law and judiciary in Pakistan; establish Pakistan Dalit rights commission and to penalise untouchability or discriminatory practices. Furthermore sensitisation of police and law enforcement agencies and providing scholarships to Dalit youth is most needed so they can pursue their legal education. Bar associations and bar councils could play a positive role to give space to Dalits lawyers in leadership positions in the bar.

Meena Varma, Executive Director of IDSN, also spoke at the event. She commented that caste discrimination and issues with access to justice for Dalits are not only present in India but also in Pakistan, Nepal and Bangladesh. Ms. Varma said the report is important for evidence based advocacy work in the UN and EU as well as for many other actors.

Ms. Varma explained that multiple and intersectional forms of violence against Dalit women,  inaccessible justice system and limited access to lawyers are some of the key challenges for Dalit women. These lead to other issues such as forced conversion, forced marriages, sexual violence and harassment against  Dalit women.  Such issues need to be addressed at international fora, including at the UN and EU, where Pakistan is party to several international conventions, but there is not sufficient discussion of caste issues. She also ensured that IDSN is providing input to UN Special Rapporteurs on several reports related to Pakistan.

Senior Dalit lawyer of the high court, Bhagwandas Bheel, also spoke at the Symposium giving the example of a number of cases of forced conversion and forced marriages of Dalit girls that are pending in courts. Mr. Bheel said the Dalit community do not get justice, despite providing evidence of birth and school certificates which reflect the victims age being below 18, but still cases go against them. Mr. Bheel says he took several cases of forced conversion and forced marriages and received several threats.

The other speakers including Zulfiqar Shah from PILER, Sono Khangharani from Pakistan Dalit Solidarity Network, Radh Bheel from Dalit Sujag Tahreek, Former Senator Gianchand and Anis Haroon Member of National Commission for Human Rights gave their remarks and validated the report findings. Finally, Rick Gold, Chair of ICDR concluded the session and thanked all participants for their remarks.

This article was based on input from Pirbhu Satyani.

Key recommendations from the report:

Development/awareness Programs and role of the Bar