Figures from the 2011 census confirm that there are more than 200 million Scheduled Castes (the official term for Hindu, Sikh and Buddhist Dalits) in India. The total number of Dalits is probably much higher as Muslim and Christian Dalits are not included in these figures. 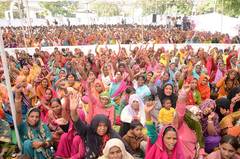 Dalit manual scavengers demonstrating for their rights. Many of them are Muslims, and not included in the official SC figures.

The number of Scheduled Castes (SCs) in India increased by 35 million during the decade ranging from 2001 to 2011, recently released census figures have shown. This means that there are now 201.4 million Hindu, Sikh and Buddhist Dalits in the country.

The increase of 20.8 per cent is somewhat higher than the general population increase of 17.7 per cent. This means that the overall SC share of the population has grown from 16.2 to 16.6 per cent. India’s demographic imbalance is reflected in the number of SCs of which there are 103.5 million males and 97.9 million females.

More than three fourths of India’s SCs are still living in rural areas, but since the 2001 census, there has been a 40 per cent increase in the number of SCs living in urban areas. This figure is now approaching 50 million, while more than 150 million still live in rural India.

India’s Scheduled Castes are distributed across 31 states and union territories. The states with the highest total numbers of SCs are Uttar Pradesh, with more than 40 million, and West Bengal with approximately 20 million. The less populous Punjab is the state with the highest proportion of SCs to its total population – 31.9 per cent.

While the 200 million SCs constitute a significant proportion of India’s population, the total, if unofficial, number of Dalits in the country is almost certainly considerably higher, as Christian and Muslim Dalits are not registered as ‘Scheduled Castes’. Hence, they are not entitled to so-called ‘reservations’ in the education system and government jobs and other constitutional safeguards.

Dr. Umakant, a researcher on Dalit issues, believes that with the rise in population of SCs the Government of India should reorient several of its policies for their overall inclusive development: “It should also increase the quantum of reservations in education and jobs and other sectors without any further delay,” he said.