A new report reveals that Dalits are particularly vulnerable to disasters before and after they strike. Consequently, humanitarian actors must pay particular attention to their situation when preparing for and responding to emergencies. 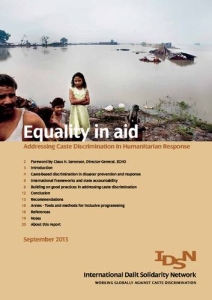 Disasters do not affect everyone equally. A Dalit family that is confined to live on the outskirts of a village in poor quality housing, and with little protection against natural hazards, is particularly exposed to them. When disaster strikes and humanitarian aid is distributed, the same family will probably suffer further discrimination because of its status at the bottom of the caste hierarchy.

The report “Equality in aid: Addressing caste discrimination in humanitarian response” is based on a comprehensive Indian case study that was done by National Dalit Watch-National Campaign on Dalit Human Rights in 2012. The study looked at a number of disasters in South Asia in recent years, including floods in India, Nepal and Pakistan as well as the 2004 Tsunami.

Numerous examples of caste discrimination in humanitarian response are listed in the report. Dalits face problems when trying to register in relief camps; they often receive poorer and fewer relief goods; they are exploited to remove corpses or debris; their losses are less visible as ownership is not formally recognised; and they are not consulted when needs are assessed.

However, the report also notes that humanitarian actors are increasingly aware of the particularly vulnerable situation of Dalits, and the high risk of caste discrimination unless they address the issue. This has become apparent in the aftermath of the onslaught of Cyclone Phailin on India’s east coast a few days ago. National Dalit Watch has alerted a number of humanitarian organisations on the importance of Dalit inclusion in their emergency response, and has already received positive reactions from some of them.

While the cyclone happened too recently to be mentioned in the report, “Equality in Aid” includes a number of good practice cases from other humanitarian emergencies in recent years. Many of these focus on the importance of including Dalits in decision-making and assessment, and ensuring that their voices are heard.

The report also contains a comprehensive set of recommendations on how to ensure that Dalits and similar groups are not excluded from disaster prevention and response. These range from matters of principle, such as recognising the illegality of caste discrimination, to practical advice on how to be aware of caste discrimination when preparing for and responding to disasters. They also stress the importance of policies and legislation that specifically address the problems of marginalised groups, including Dalits.

The 2012 Indian case study and the new report have been financed by the European Union. In his foreword to the report, Claus Sørensen, Director-General of the EU Humanitarian Office (ECHO), notes that “more remains to be done to ensure that equality in humanitarian response overall is achieved”. He adds that the report identifies “clear recommendations for how to achieve this in the context of caste discrimination.”