In the run up to human rights day 2010 Dalit activists have been mobilising through marches and awareness raising activities from activism in Nepal, a march in India, and human chains in Bangladesh to an exhibition in the UK to highlight the plight of Dalits. These are great initiatives, but the battle for securing human rights for more that 260 million Dalits, discriminated against on the basis of their caste, is fought every day in the communities by Dalit men, women and children who speak up to stop discrimination against them despite the risk of violence, rape, public humiliation, destruction of property and other acts of reprisal. 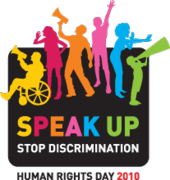 Examples of atrocities committed against Dalit human rights defenders are unfortunately the norm rather than the exception. This is an effective system of oppression, as Dalits who try to better their circumstances risk being attacked and essentially end up being worse off than when they raised their voice against oppression in the first place. Against these odds Dalits are still fighting to get their voices heard and they need and deserve the support and attention of the international community in their fight for justice and equality.

In her press statement on Human Rights Day 2010 the UN High Commissioner for Human Rights, Navi Pillay, encourages everyone to be a human rights defender, saying, “All it takes is commitment and courage.” Commitment and the courage to support the Dalit struggle despite India’s powerful economic status are what Dalits desperately need from the world on this Human Rights Day.

One example of how the international community could support Dalit human rights defenders is by bringing up this issue in political, human rights and other dialogues with India and other caste affected countries. For example, on the 10th of December, the EU is holding its EU-India summit. Unfortunately the issue of caste discrimination is absent from the agenda, which focuses squarely on trade relations, despite the talks taking place on Human Rights Day. This is regrettable and global awareness must be spread, human to human, to put pressure on our politicians to pursue this issue, despite the possible consequences for economic relations.

As Ms. Pillay commented on caste discrimination in an opinion piece last year, “Action to stem an abhorrent form of marginalization and exclusion which traps the victims in hopelessness and poverty is long overdue,” adding that we owe it to the victims of caste discrimination to support their struggle just as we supported the struggle of those who were oppressed by the apartheid regime.

This support can come from all walks of life, from citizens, teachers and journalists who raise awareness about this issue to politicians and opinion makers who demand the inclusion of action to end caste discrimination in UN and EU policies, statements and resolutions.

The struggle to end caste discrimination neither begins nor ends today on Human Rights Day, it requires sustained action from all of us to make sure that Dalits are not the only ones speaking up against a brutal system of repression and segregation that no one should be allowed to ignore.

* Caste discrimination subjects Dalits to horrific acts of repression and violence and forces them to live in apartheid style segregation from the rest of society, severely impairing equal rights in access work, education and basic services such as water, sanitation and healthcare. There are 260 million Dalits globally, with the majority living in South Asia. There are about 200 million Dalits in India alone.

Thousands of Dalits and socially excluded marched in India:On the 5thDecember, World Dignity Day, Dalits marched in New Delhi. The march was organized by an IDSN associate – the National Confederation of Dalit Organisations (NACDOR) in India and highlighted Dalit’s plights, issues and concerns to the parliament and prime minister. Read more about the march here.

Report on the State of Human Rights in India highlights caste discrimination: A report on the state of human rights in India, issued by the Asian Human Rights Commission (AHRC) on Human Rights Day 2010, finds that India, despite its status as the ‘world’s biggest democracy’ is, “drawn with the crayons of caste and religious prejudices, where millions of citizens are still considered ‘untouchable’.”  The report highlights widespread caste discrimination in access to justice, health care, land, social services, and right to food and outlines several cases of atrocities committed against Dalits. It also points out that India’s position, that caste issues are an ‘internal matter’, only exacerbates the problem. Read caste discrimination relevantexcerpts from the report here or the full report here.

The National Dalit Commission (NDC) and Office of the UN High Commissioner for Human Rights in Nepal (OHCHR- Nepal) have issued a statement identifying crucial gaps in current legislation that must be bridged to, “ensure effective prosecution of criminal offense based on caste-based discrimination and untouchability and compensation for the victims.” They add that, “if the current gaps are corrected, the proposed law could become a key tool to curb the deep-rooted practice of caste based discrimination and practices of untouchability in Nepal.” Read the statement here.

16 days of activism to stop violence against Dalit women: Another IDSN associate, The Feminist Dalit Organisation (FEDO) Nepal, has organised 16 days of activism to bring awareness to the issue of violence against Dalit women, with a particular focus on intercaste marriage – and the atrocities women who dare to marry outside their caste are subjected to. Read more here.

Nepal urged to ensure justice for victims of caste discrimination: A monitoring mission in Siraha district of Eastern Nepal has prompted human rights monitors to urge the government to act immediately to ensure access to justice for victims of caste and gender discrimination. The mission was carried out by the National Dalit Commission (NDC), the National Women Commission of Nepal (NWC) and the Office of the UN High Commissioner for Human Rights in Nepal (OHCHR- Nepal). The mission found that many cases of caste-based discrimination and gender-based violence in the district were not prosecuted and also received reports that human rights defenders or their family members were threatened when they tried to take up this issue. Read more here.

Human chains are used to bring awareness to Dalit demands for equality:On the 5th December, World Dignity Day, speakers demanded special clauses in the Bangladesh constitution to free Dalits from social exclusion, oppression and disregard. The demands came at a human chain and procession programme held in front of the National Museum at Shahbagh in the city yesterday. IDSN National Platform member – the Bangladesh Dalit and Excluded Rights Movement (BDERM) jointly organised the programme with and Nagorik Uddyog. Read more here.

UK: Dalit Rights are Human Rights: A photo exhibition and seminar in the UK Department for International Development (DFID) highlighting the issue of caste discrimination and the presentation of One World Action’s Sternberg Award to the Dalit Women’s Forum in Dhaka, are some of the events taking place to ensure a much needed focus on Dalit issues in the UK around December’s Human Rights Day. The exhibition at DFID, produced by One World Action, runs from the 6th to 13th of December and focuses on Dalit communities in Bangladesh. It has been organised to recognise Human Rights Day on December 10th and the issue of caste discrimination as a human rights abuse. Read more about these events here.

Dalit Liberation Day marked on the 5th December: Churches across the globe have called for all Christians to pray for Dalits on the 5th December and work to overcome discrimination against Dalits. More information can be found here.