A cold spell in the north of India has cost hundreds of lives among homeless people. A significant number are believed to be Dalits. 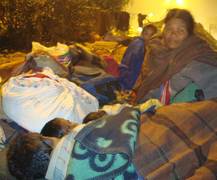 A homeless Dalit family after being evicted from their night shelter by the authorities. (Photo: RAJ BHUSHAN for IDSN)

The already tough lives of India’s poor and destitute homeless population are being seriously affected by a combination of temperatures close to zero degrees and the authorities’ harsh attitude towards them.

Last week, the UN Special Rapporteur on the right to adequate housing, Ms. Raquel Rolnik, expressed her concern about the number of homeless people that have died this winter in New Delhi and the risk to the lives of many others given the weather conditions and insufficient number of shelters.

The UN official pointed out that the homeless population has been growing since 2007, but that the number of homeless shelters in New Delhi has been reduced to approximately half the previous number. She noted that one of the reasons for demolishing shelters seems to be the preparations for the Commonwealth Games in the Indian capital later this year.

Earlier this month, 400 people were evicted from an area they were using as a shelter at Pul Mitahi in the old part of Delhi. Many constructions workers and Dalit families were living in this area.

There are no official estimates on the number of Dalits among the homeless. According to some estimates, however, there are an estimated 150,000 homeless people in New Delhi alone. Human rights activists in the Indian capital believe that a significant proportion of them are Dalits.

Homeless people in other parts of Northern India are also suffering from the cold weather. As many as a hundred homeless persons have reportedly died in the states of Uttar Pradesh and Bihar in recent months. All in all, this year’s cold temperatures are estimated to have cost more than 500 lives across Northern India.