A new UN report finds that India is still home to the world’s largest illiterate population. The report states that caste systems in South Asia have a negative effect on education opportunities. 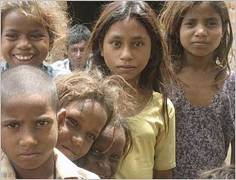 Members of the Musahar community suffer caste discrimination. (Photo from the UNESCO report courtesy of the Global March against Child Labour)

Dalits in India and other countries in South Asia have lower prospects of getting an education than the average population. Dalit girls living in rural areas face even more discrimination.

Such is one of the grim conclusions of a new report from UNESCO – the United Nations Educational, Scientific and Cultural Organisation. According to the report ‘Reaching the marginalized’, deep caste-based disparities remain in a country like India where legislation has not succeeded in changing deeply entrenched practices and attitudes.

“Belonging to a scheduled caste or tribe lowers prospects of school attendance. Being a girl and living in a rural area brings a further layer of disadvantage,” the report says and adds that the percentage of rural girls in school in 2004/2005 was just 66 percent – compared to a national average of 80 percent.

A specific case of caste discrimination is included in the report. The children from the Musahar – or ‘rat catcher’ community in Uttar Pradesh and Bihar – face serious discrimination if they go to school. ‘The higher-caste students tell us that we smell bad,’ one girl says. Consequently, few Musahar girls attend school.

According to Musahar elders, government policies have improved but social attitudes have not. Children are admitted to school and have legal rights, and yet, they dare not attend because of the behavior of teachers and children from dominant castes.

Overall, the report paints a dire picture of the education prospects of children in the world’s poorest countries. The global financial crisis has hit them hard, and millions will be deprived of an education. India has the highest number of illiterate people in the world – may of whom are Dalits – and the numbers are also high in countries like Bangladesh and Pakistan.