India should adopt the UN principles and guidelines to end caste discrimination, a group of eminent panelists said at a press briefing in New Delhi on 4 December. 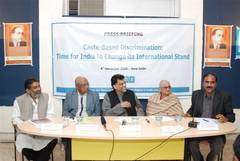 The Government of India must radically change its international stand on caste discrimination and support the efforts of the international community to address the multiple human rights violations that affect more than 200 million Dalits in the country.

Such was the message from a panel of experts representing the Working Group on Human Rights in India and the UN (WGHR), who gathered in New Delhi on 4 December to mark the upcoming Human Rights Day. In a press release following the briefing, WGHR called India’s position on caste at the UN “regrettable” and accused the government of denial.

“The Indian government should adopt the UN stand on discrimination based on work and descent and take the lead in the global campaign to eliminate discrimination, especially on grounds of caste,” said Praveen Rashtrapal, who represents the Congress Party in the Upper House of Parliament.

Paul Divakar, WGHR member and General Secretary of the National Campaign on Dalit Human Rights (NCDHR), added that “India’s ban on caste-based discrimination will not be effective unless the government moves away from its rhetoric and implements a stronger strategy both at the national and international level.”

The panel also consisted of Miloon Kothari, a former UN Special Rapporteur on housing, Manoj Mitta, senior editor, Times of India, and Dr. V. Mohini Giri, former chairperson of the National Commission for Women. She noted that caste discrimination is one of the greatest obstacles to achieving unity in India.

Read more about the UN principles and guidelines