Dalit women activists from India and Nepal took part in the European Development days to share their experiences with, and learn from, other women activists fighting similar struggles across the globe. The women also shared their stories with EU officials and development actors. 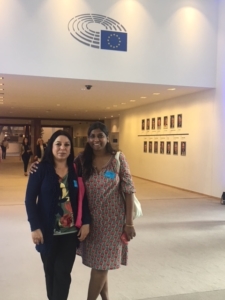 An IDSN delegation took part in the European Development Days in Brussels from 5-6 June 2018, organized by the European Commission. The delegation included Asha Kowtal from the National Dalit Women’s movement –the All India Dalit Mahila Adhikar Manch (AIDMAM), in India, and Renu Sijapati from the Feminist Dalit Organisation (FEDO) in Nepal. The aim of the event was to bring the development community together to share ideas and experiences in ways that inspire new partnerships and new solutions to the world’s most pressing challenges. The theme of the days was women and girls at the forefront of sustainable development, and there were 8000 participants present.

Asha and Renu experienced that they had much in common with many other women’s rights activist from across the world and could inspire and be inspired through the many sessions they attended. Perhaps most importantly the women could find global solidarity with the common challenges they faced, both in terms of the rights they are fighting for but also on a more personal levels in their roles as human rights defenders in often very challenging and hostile environments.

After the Development Days, Asha and Renu also took part in meetings with key EU officials, to give them an update on the current situation in Nepal and India, to take note of recommendations and also to hear more from the officials about what the EU is doing to address caste discrimination.