A Pakistani Dalit activist and human rights defender was released by his abductors on 28 October after having endured 34 days of captivity. 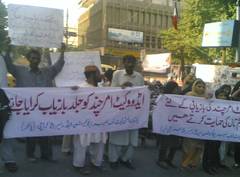 Activists demonstrate outside the Karachi Press Club against the kidnapping of Amarchand Bheel. (Photo: Rafiq Channa)

An attempt to free Dalit bonded labourers from the clenches of a powerful landlord in Sindh province may have cost Dalit activist Amarchand Bheel more than a month in captivity.

Amarchand Bheel, a lawyer and human rights defender, was kidnapped by armed men on 25 September on his way to a district court in Sanghar. He was blindfolded and kept in various places before being released by his captors in the early hours of 28 October near a highway.

The Dalit activist believes that his abductors were associated with Thakur Qaimkhani Baig, a landlord who allegedly kept a large number of Dalits as bonded labourers. Amarchand Bheel had infuriated the landlord earlier this year when he and other activists protested against the captivity of 144 bonded labourers.

The kidnapping of Amarchand Bheel led to a three-week hunger strike outside the Karachi Press Club by his friends and colleagues who demanded his release as well as action from the authorities.