Conference on Dalit issues in Nepal

The international conference “Envisioning New Nepal: Dynamics of Caste, Identity and Inclusion of Dalits” covered a number of important issues. 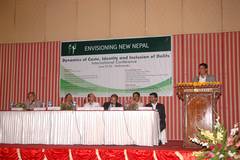 In late June 2010, the Samata Foundation organised a three-day international conference in Kathmandu. It brought together scholars, politicians and activists working on Dalit issues across South Asia.

The event aimed at creating a dialogue between Dalit and non-Dalit political leaders, the academic world and the general public in order to make Nepalese society more inclusive for Dalits and more responsive to the Dalit agenda.

The conference presentations covered a number of important Dalit issues. They included identity and politics, human rights and dignity, the development paradox, constitution building, federalism, affirmative action and the effects of globalisation on the Dalit movement.

The discussions were enriched by the fact that a large number of participants were Dalit, who possessed insights drawn from their own life experience. They were also able to present their perspectives on the state of Nepalese politics and the restructuring of the state.

The participants, many of whom are associates of the International Dalit Solidarity Network, considered the conference a great success. The Samata Foundation is now taking the lead in following up on some of the important points raised during the discussions.

Concluding points from the conference (a full report will follow later)