Navsarjan Trust have released the study ‘Gender Violence and Access to Justice for Dalit Women in collaboration with Minority Rights Group International. The report finds Dalit women face severe difficulties in accessing justice and are extremely vulnerable to violence, sexual abuse and other atrocities. 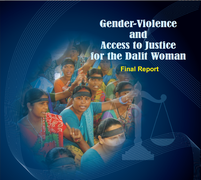 News on the report from DNA analysis:

While women are normally considered to be vulnerable to atrocities, women belonging to Scheduled Castes (SC) and Scheduled Tribes (ST) are more prone to various crimes. The study shows that it is more difficult for Dalits to get justice in the court of law for their traumatic sufferings. The study indicates that in the cases of violence by non-Dalits on Dalit women, no non-Dalit accused have been convicted so far, and in cases of violence by Dalits on Dalit women, there have been convictions only in six cases.

The study, ‘Gender-Violence and Access to Justice for the Dalit Woman: Final Report December 2011’, was undertaken by Navsarjan Trust in collaboration with Minority Rights Group International, London. It was focused on three districts of Rajkot, Kutch and Bhavnagar. It covers the atrocities cases on Dalit women registered from 2004 to 2009.

Surprisingly, whatever data was received for the study shows a more gloomy picture of delivery ofjustice to the victims. Of 889 registered cases —185 cases of violence by non-Dalits and 704 cases of violence by Dalits, only 6 cases (or 0.7% of the total) resulted in conviction of the accused.

The report says, “Also significant is the absence of even one conviction of a non-Dalit accused. Given that 50.27% of crimes by non-Dalits on Dalits were of a grievous nature — cases that resulted in death or grave physical injury to the woman — not one case has ended in a conviction.Further, a full 50.5% of all cases remain pending in the sessions’ court. And the police stations did not provide any information on the status of 32.7% of cases filed. In other words, only 17% of all cases have reached court settlement or judgment.

Talking about the study, Majula Pradeep, of Navsarjan, said: “Non-Dalit accused often walk free from the cases because of political and social clout they have. For instance, in Bhavnagar, a majority of police personnel belong to a particular caste, so they don’t take seriously the complaints made by Dalit women. We will be submitting our report to state government departments, advocating for the rights of the Dalit women.”