Press Release: Activists, members of international organisations, NGOs, Solidarity Networks and researchers from across the world, have launched a landmark Urgent Global Call for Action to Eliminate Caste-Based Discrimination.The call was launched on the 1st December, as an outcome of the International Consultation on Good Practices and Strategies to Eliminate Caste Based Discrimination, held in Kathmandu, Nepal. 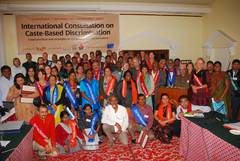 The call, is a call for action for “citizens of the world to bring an end to millennia of immense human suffering, resulting from a brutal system of caste segregation, affecting over 260 million people worldwide.

The Deputy Prime Minister and Minister for Foreign Affairs of Nepal, Narayan Kaji Shrestha, spoke at the Consultation, affirming the commitment of the Nepal Government to take this call for action forward. In his speech he reached out to other Governments of caste affected countries to come forward and join Nepal in making this issue a priority on a global level.

Mr. Shrestha commented, “I firmly believe that this consultation will be instrumental in bringing all concerned parties together to end caste-based discrimination.”

Head of the Asia Pacific Unit at the Office of the UN High Commissioner for Human Rights (OHCHR), Rory Mungoven, confirmed the commitment of the OHCHR to making caste-based discrimination a priority in their work, not only in Nepal, but also on a global level.

“For far too long people from across the globe have suffered inhuman and unjust treatment simply because of the caste into which they were born. With this Global Call, I believe, we have reached a new significant benchmark in the struggle against caste discrimination, from where solidarity and action worldwide will spread like wildfire,” said Rikke Nöhrlind, Coordinator of the International Dalit Solidarity Network (IDSN).

The Global Call for Action forms a part of the consultation declaration, accompanied by a number of concrete recommendations from the consultation and good practice cases that will be compiled and made available.

The Consultation was organised by the International Dalit Solidarity Network, and co-organized by the Feminist Dalit Organization (FEDO), the Dalit NGO Federation (DNF) and the Nepal National Dalit Social Welfare Organisation (NNDSWO).