UN High Commissioner: Tear down the barriers of caste

The UN High Commissioner for Human Rights, Navi Pillay, calls on the international community to ‘come together’ and support caste affected-communities ‘as it did when it helped put an end to apartheid.’ 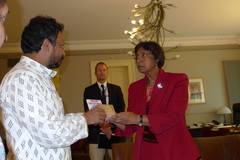 Ms Pillay received a brick from a demolished dry latrine when she met Dalit representatives on 16 September. The brick symbolises the degrading practice of making members of a “lower castes” clean public toilets with their bare hands.

The time has come to ‘eradicate the shameful concept of caste’ – and the international community and the UN have an important role to play in such efforts, says the UN High Commisioner for Human Rights.

In an opinion piece, distributed globally, Ms Navi Pillay calls caste discrimination ‘an abhorrent form of marginalization and exclusion’ and a ‘global phenomenon’ affecting 260 million people. She also compares caste to ‘other seemingly insurmountable walls, such as slavery and apartheid’ and concludes that ‘we can and must tear down the barriers of caste.’

“All states must rally around and endorse these norms,” the High Commissioner writes. The UN guidelines constitute the first comprehensive international framework to address and prevent caste discrimination and have been subject to considerable media debate in recent weeks following their endorsement by the Government of Nepal.

Click here to read the opinion piece by the High Commissioner