UN expert concerned about “high levels of impunty” in India 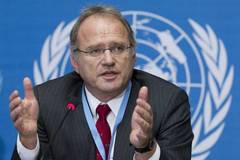 In conclusion of an official visit to India between 19-30 March, the UN expert released a press statement on 30 March in which he expressed concerned that the challenges with respect to the protection of the right to life in this country are still considerable.

In the statement, he expresses particular concern about the high level of impunity that the police and armed forces enjoy, due to the requirement that any prosecutions require sanction from the central government. “The main difficulty in my view has been these high levels of impunity”, stressed Mr. Heyns.

According to the UN expert, other areas of concern relate to the prevalence of communal violence, and, in some areas, the killing of so-called witches, as well as dowry and so-called “honour” killings, and the plight of dalits (‘untouchables’) and adivasis (‘tribal people’).

During his visit, the UN expert met with Dalit leaders in New Delhi and Ahmedabad in India. Specific concerns highlighted in these meetings were the communal violence in Kandhamal district in Orissa in 2008, and the 2002 riots in Gujarat.

In conclusion of this visit, Mr. Heyns proposed a number of provisional steps to be taken to address these concerns, including the establishment of a Commission of Inquiry. He also recommended the immediate repeal of the laws providing for the immunity from prosecution of the police and the armed forces, and the ratification of a number of international treaties.

The UN expert will present his final conclusions and recommendations in a comprehensive report, which will be submitted to the Human Rights Council at a future session in 2013.

The visit was conducted in the same month, as the UN Special Rapporteur on the situation of human rights defenders, Mrs. Margaret Sekaggya, presented her report to the Human Rights Council about the situation of defenders in India, including Dalit rights’ activists. On this occassion, IDSN co-organised a side event, which highlighted the need for protection of Dalit human rights defenders in South Asia.

In April, the UN Special Rapporteur on the sale of children, child pornography, and child prostitution will visit India.

IDSN recommends states to address the concerns and recommendations raised by the UN experts in the Universal Periodic Review of India on 24 May 2012.