Report: Over 50% of child labourers in cottonseed farms in India are Dalits or Adivasis 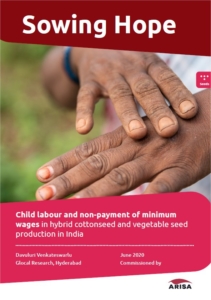 The report Sowing Hope, which examines child labour and wages in cotton and vegetable seed production in India, says that while still too high, the total amount of child labourers has in fact declined since 2015, due to initiatives by companies and NGOs.

The report however does find that wages across the sector are still far from the minimum wage, a figure which has not improved significantly. The prevailing wage rates were found to be 24-41% below minimum wage in some Indian states.

The researchers also found differential treatment of Dalits in the workplace with reports of Dalit workers being treated differently to dominant castes and not being given the same privileges in relation to taking breaks during work hours or being treated with respect and dignity.

613 sample farms were surveyed showing a direct correlation between the decline of child labour in companies who have implemented special programmes to address this issue in relation to those who have not yet tackled the problem.

IDSN welcomes ‘Sowing Hope’ and urges companies looking to address child labour and the working conditions in the seed sector to address caste discrimination directly, as it is a key root cause of child labour, also evidenced by the large percentage of Dalits engaged in this work as documented. This caste dimension is also witnessed in many other sectors including Leather, Stone and Minerals, Construction, Carpet Weaving as well as across the Garment and Agriculture sectors.

For more information on how to address caste in supply chains and workplaces – see the Ethical Trading Initiative’s Base Code Guidance Caste in Global Supply Chains.