Protest march against diversion of funds meant for Dalits

On April 24th thousands of Dalits marched towards the Indian Parliament to reclaim their rights to vast funds meant for Dalits, which have been diverted or misallocated, to benefit other sections of society. The funds could help lift millions of Dalits out of extreme poverty but are instead being used on general schemes, hardly benefitting Dalits. On the 9th of May, Dalits across several states in India, will also march to put pressure on the Government to ensure that funds allocated for Dalits actually benefit Dalits. 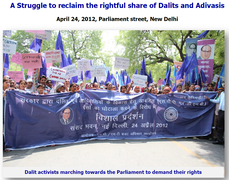 According to reports from the campaigners, protesters flooded the roads leading to the Parliament as they marched along to drum beats,.  People were furious and ran up to police barricades, to signal if the demands are not met, they would cross-over while protesting the next time. The campaigners submitted a memorandum to the Prime Minister with a list of demands to reclaim the funds that Dalits have been cheated out of.

The protest on the 24th of April has been organised in coordination with the re-opening day of the Parliament session. There were parallel protests in 6 other states and eventually this will culminate into a huge mass mobilization on 9th May 2012.

The marches are part of the campaign “Sau Mein Pachees Haq Hamara” organised by a coalition of organizations across the country, committed to the realization of the rightful economic claims of Dalits and Adivasis (Scheduled tribes) under the specially constituted  national schemes in India. The coalition is named the  SC/ST Budget Adhikar Andolan and includes IDSN member NCDHR.

“India has allocated vast sums to tackling the poverty of Dalit communities through various schemes through the Special Component Plan. If properly allocated at least half of the Dalits currently living below the poverty line would now be above it. However funds are diverted, misallocated or notionally allocated. Schemes rarely reach their intended beneficiaries. As per the National Planning Commission norms Dalit communities are due $10.60 billion for the year 2011-2012, but have been allocated only $5.88 billion. Even out of this at least 70% is either notional allocation or is diverted to other purposes.”

Across India these past months Dalit activism has been blossoming and protests and action to claim Dalit rights and demand better treatment have been regularly reported by National media.

Read the full report on the March, from the Campaign, including the list of demands submitted to the prime minister

Find more information on monitoring of budgets on NCDHR’s website