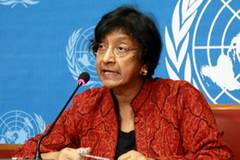 Non-discrimination is the official theme of this year’s Human Rights Day on 10 December. In a statement, the UN High Commissioner for Human Rights, Navi Pillay, encouraged people everywhere to embrace diversity and “take concrete and lasting actions to help put an end to discrimination.”

The High Commissioner noted that discrimination is still rampant and described its various forms, including those based on race, ethnicity, gender, disability – and caste.

“Many other groups face discrimination to a greater or lesser degree. Some of them are easily definable such as persons with disabilities, stateless people, gays and lesbians, members of particular castes and the elderly,” she said.

In recent months, Ms Pillay has championed the international struggle to end caste discrimination by issuing a strong statement on the issue and continuing to speak out against caste systems in a number of media interviews.

At a press conference prior to Human Rights Day, the High Commissioner urged individuals worldwide to make an extra effort to tackle discrimination starting from their own homes and workplaces: “You cannot defeat discrimination by shutting your eyes to it and hoping that it will go away. Complacency is discrimination’s best friend,” she said.

A similar call was made by the independent experts of the UN Human Rights Council, the UN Special Procedures, on Human Rights Day. They called on governments to “be the first and strongest advocates for equality and non-discrimination” and added that “those who are most vulnerable to discrimination in our societies should always be the most protected, never the least.”

IDSN urges the independent experts to make use of the draft UN principles and guidelines as a guiding framework to eliminate caste discrimination. The UN Special Rapporteur on contemporary forms of racism, Mr. Githu Muigai, did so recently when he recommended states to “rally around” the guidelines.

Joint statement of the Coordination Committee of Special Procedures