Manual scavengers: The government has 60 days to act

Manual scavengers from across India gathered at a mass rally in New Delhi Monday 1 November and demanded immediate government action to end manual scavenging once and for all, rehabilitate former manual scavengers and apologise for decades of suffering imposed on this group. 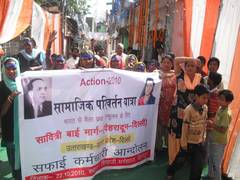 The rally marked the end of the nationwide bus ‘march’, the ‘Samajik Parivartan Yatra’, to end the manual cleaning of human excreta from non-flush toilets and “reclaim dignity, equality and human personhood” of manual scavengers”. The march has highlighted the Dalit struggle in 20 Indian states, spreading awareness and inspiring manual scavengers across India to quit and protest, before culminating in New Delhi.

At the rally former manual scavengers spoke of the torment involved in this demeaning work. Anita from Punjab explained how she had fallen while working, heavily pregnant, and had been left in a pile of excreta. No one would help her up because of ‘untouchability’. Others spoke of similar discrimination and of the health hazards that came with manual scavenging. One protester remarked that she would never return to manual scavenging – even if her life depended on it.

The movement to eradicate manual scavenging in India, Safai Karmachari Andolan (SKA), had organised the march as part of its Action 2010 campaignto end manual scavenging by the end of 2010. Following the rally, National Convenor of SKA, Bezwada Wilson, explained that the campaigners are now giving the government time to meet the demands for implementation and rehabilitation but added that, “If the government does not accept our demands within 60 days, we will all come to Delhi and stay put here until our demands are met.”

The demands include the strict implementation of the 1993 act abolishing manual scavenging, the punishing of violators of this act, the provision of relief for manual scavengers and education and job training. Wilson stressed that they will settle for nothing less than a ‘complete package’ from the government, not only to free the current manual scavengers, but also to ensure that future generations will never be subjected to the same inhuman treatment as they were.

Unfortunately the Indian government does not have a good track record when it comes to the implementation of its laws to end discrimination. As Wilson explains,

“At least 18 times the government missed its promise in implementing a 1993 Act which penalises offenders who continue to build dry latrines or employ persons for manual scavenging. Nowhere in the 625 districts in India has the government implemented this Act.”

Therefore IDSN will monitor the situation closely and strongly hope that the government will meet the demands of the protesters and finally end this humiliating practice.

IDSN has offered a message of solidarity to the protesters, supporting their goals and notes that, “The particular plight of the manual scavengers has also been noted by the United Nations High Commissioner for Human Rights, Navi Pillay. In her statement  ‘Tearing down the wall of caste´, she reflects on this shameful practice following her meeting with a group of Dalits, who gave her a piece of brick from the wall of a torn-down latrine as a symbol of the global struggle against manual scavenging.  The High Commissioner has repeatedly called upon the International Community to support Dalits in their fight against caste discrimination.”

Read the press release from SKA on the rally

View photos from the march and rally