The 2016 budget of the Government of India allocates less than half of the required amount to the country’s Dalit and Adivasi populations. 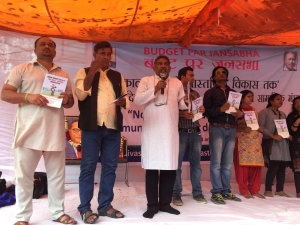 ON 29 February, the NCDHR launched an analysis of the budget.

Approximately one fourth of India’s population consists of Dalits and Adivasis, and they are supposed to receive budget allocations according to their numbers. But yet again, these groups have been let down by the country’s government in the 2016 budget.

Allocations for Scheduled Castes (Dalits) under the new budget is only 7.6 per cent when the due amount should actually be 16.8 per cent. For Scheduled Tribes (Adivasis), the percentage is 4.36 rather than the required 8.6.

“We need to move beyond the optics. The first step is to allocate the money that is in proportion to the population,” said Paul Divakar of the National Campaign on Dalit Human Rights (NCDHR) in a comment on the budget.

On 29 February, the NCDHR published an analysis booklet of the budget, highlighting the fact that not only is budget allocation much lower for the two groups than their population share – what has actually been spent on them has for many years been much below the budgeted amounts.

Moreover, the analysis shows that the majority of government schemes that are supposed to contribute to the development of Dalits and Adivasis are completely irrelevant. The Finance Ministry has grouped 292 schemes under the so-called Scheduled Castes Sub Plan – only 26 (or 9 per cent) of these schemes “have any direct relevance to scheduled castes”.

Dalit and Adivasi women do not receive the attention they need from the government. Only one percent of the budget allocation for Dalits is planned to benefit Dalit women, while Adivasi women receive two per cent of the amount allocated to the Tribal Sub Plan.

“Critical intervention is urgently required to bridge the wide gap of development for the uplift of Dalit and Adivasi women,” the analysis points out.

NCDHR analysis booklet of the 2016 budget

NCDHR news release on the 2016 budget

Dalits, adivasis get raw deal in Budget (Times of India)

Dalits and Adivasis will be tricked again (Scroll.in)