With support from DanChurchAid Nepal, IDSN organized and facilitated a capacity building workshop on October 10, in Kathmandu. The day focused on ‘Making international institutions and mechanisms work for you’ was to help inform and strengthen Nepalese Dalit activists’ engagement with the UN and EU and as well as their advocacy capacities toward such institutions. 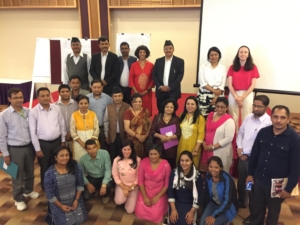 Participants at the IDSN workshop

The workshop included an overview of the EU and its institutions by IDSN EU Adviser, Claire Ivers, specifically the different roles of the European Council, Council of the EU, European External Action Service (EEAS), European Commission, and European Parliament. EU Human rights policy was also explored along with what avenues are available for advocacy and lobbying most suited to pursuing Dalit rights.

This was followed by an explanation of how to use the UN institutions to advance Dalit Human rights in Nepal, facilitated by Meena Varma, IDSN Chair and Acting Director. This explored the role of the UN Human Rights Council and Treaty Bodies, as well as avenues for NGO advocacy through the UN and a group exercise allowing participants to draft their own recommendations in relation to the UN Special Rapporteur on minority issues, Committee on the Elimination of Racial Discrimination (CERD) and CEDAW (Convention on the Elimination of all Forms of Discrimination Against Women).

Increasing the skills and knowledge of Dalit activists, organisations and as a result Dalit communities, the workshop not only provided participants an opportunity to learn more about how they can access the EU and UN institutions for advocacy, but also provided an opportunity for networking and linkages between local and national organisations and IDSN. The workshop involved 26 participants from 13 different organisations, almost half of which were women. The information, networking and capacity the workshop provided will not only help the long term goal of elimination of caste-based discrimination, but is specifically relevant in the Nepalese context ahead of 2018 CERD review.

“The presentation about EU mechanisms is new to us and also the information about the UN Minority Forum and its relevance for the Dalit Community is interesting. After this workshop we can work and coordinate with the EU delegation and engage with the UN Minority Forum. Overall the workshop is a success to give some new knowledge and skills and re-energize us,” stated Sushil BK, Vice-President of the Dalit NGO Federation after the workshop.

Generally, the participants were overwhelmingly positive about the workshop, the only complaint being that more time was needed.