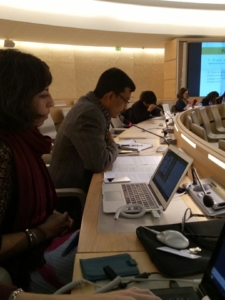 Prior to the consultation meeting IDSN submitted to CERD a joint response to its questions with Nepal National Dalit Social Welfare Organization (NNDSWO) and Dalit Solidarity Network UK. The submission highlighted some of the challenges that the organisations face in advocating for the rights of Dalit communities, positive aspects of engagement with CERD and suggestions for improvement.

To the consultation IDSN brought two representatives of its member organisations, Deepak Nikarthil from the National Campaign on Dalit Human Rights (NCDHR) and Bakhta Bishwakarma from NNDSWO.

At the start of the meeting a CERD member, Verene Albertha Shepherd, presented key findings from the close to 50 submissions from civil society organisations. It included challenges faced by civil society in their efforts to eliminate racial discrimination – lack of awareness of human rights among the discriminated communities, a denial of racial discrimination, a lack of data and national laws protecting minorities, racialisation of poverty and rise of hate crime. A CERD member mentioned a number of racially discriminated groups – people of African descent, Dalits, Roma people, immigrants, refugees and asylum seekers.

Anti Caste Discrimination Alliance highlighted that the UK still lacks legal protections against caste-based discrimination despite the CERD recommendations. A panellist of the consultation, Claire Thomas, from Minority Rights Group International, made a specific recommendation to CERD to ensure that ethnicity is included in the SDGs’ indicators, as it would include various groups, such as those discriminated on the grounds of caste.

Bakhta Bishwakarma, representing IDSN and NNDSWO, spoke about caste-based discrimination in Nepal. He outlined Nepalese government’s failure to submit state reports for over 10 years, since 2002, which resulted in a gap in the interactions between the civil society and CERD. He suggested to CERD to consider new ways to engage with civil society, independent of state reporting and to encourage states to develop and effectively implement national actions plans to address racial discrimination.

The CERD Chairperson, Anastacia Crickley, ended the meeting by thanking all participants for their statements and recommendations, and ensured that whilst not all suggestions would be implemented immediately they will be carefully considered when undertaking state examinations.