Dalit women in Pakistan – denied a life in dignity and respect

A new report documents the situation of Pakistan’s Dalit women; one of the most socially excluded and impoverished sections of the population. The shadow report for a UN CEDAW review of Pakistan in February calls on the Government to focus on education, access to basic services, and laws and special programmes to protect the rights of Dalit women. 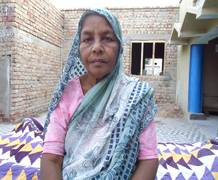 “My community should know their rights as equal citizens and should live a life in dignity and respect”, says Ms. Moolan Bai from the Bangi caste, Mithi, Pakistan.

For the first time, a report to a UN treaty body committee specifically addresses the situation of Dalit women in Pakistan. The report finds that these women are triple victims of discrimination – due to caste, gender and religion.

The report ‘SCHEDULED CASTE WOMEN IN PAKISTAN – Denied a life in dignity and respect’ has been prepared by the Pakistan Dalit Solidarity Network in association with IDSN for the examination of Pakistan by the UN Committee on the Elimination of all forms of Discrimination Against Women (CEDAW). The review is scheduled to take place in Geneva on 12 February 2013.

In Pakistan, Dalits (officially known as ‘scheduled castes’) experience multiple forms of discrimination among the country’s 180 million people. Already considered a religious minority in an Islamic society, Dalit Hindus and Christians are further victimized as ‘untouchable’ by the rest of the society and their own communities.

The situation of Dalit women is even worse due to the discrimination they face on the basis of caste and gender. They are extremely vulnerable to social exclusion, and are often subject to severe discrimination and physical assaults.

Dalit women are marginalised due to their weak socio-economic status, low education levels, and their location in harsh conditions of work – such as bonded labour, cotton picking and working in brick kilns. In the rural provinces of Pakistan, the majority of bonded labourers come from a scheduled caste background. Rape of female bonded labourers is widespread, and there is little legal recourse to address the problem.

Sexual abuse and kidnappings are some of the worst problems for Dalit women and girls in Pakistan. Ms. Radha Bhil, a Dalit woman working as a social mobilizer, says: “Women and girls from the lower caste or religious minority are easy targets for harassment, because the majority knows that they are weak and cannot take any action.”

A number of cases in 2012, including the abduction of 14-year old Rinkel Kumari, have demonstrated that scheduled caste women are particularly vulnerable to kidnapping and forced conversion into Muslim families under the disguise of marriage. The report recommends that the government puts in place laws and measures which take this matter into account and protect the rights of these minority girls.

Another general problem is the overwhelming illiteracy and poverty, which hinders Dalit women from entering the education system. Dalit students are discriminated against and discouraged by teachers and fellow non-Dalit students. Affirmative programmes are therefore needed. Ms. Moolan Bai, a Dalit woman from Mithi town, calls on her government to act: “The fate of my community would be changed through education and learning of new skills, if the government gives attention to their development.”

Health indicators also reveal Dalits to be in the poorest condition of all. Access to basic health services is sometimes blocked by health staff, who deny them proper treatment or refuse to touch their bodies.

Although the Constitution of Pakistan prohibits discrimination on the ground of caste, successive governments have taken no or very little action to eliminate caste-based discrimination. In fact, the situation of Dalits and other religious minorities has deteriorated in recent years.

Despite commitments in international fora to address the problem, such as the Universal Periodic Review, the present Government of Pakistan has not yet initiated any affirmative action programmes for the scheduled caste community in the country. Nor has it included any information on this particular community in its reports to the CEDAW Committee.

The report makes a number of recommendations to the CEDAW Committee on the following issues: Affirmative action; elimination of discrimination in political and public life; the right to education, employment, and health; disaster management; and forced conversions.

With the submission of this report, it is hoped that the often overlooked situation of scheduled caste women in Pakistan will receive attention and recognition. The report is intended to act as a catalyst for specific government action, such as the adoption of a law prohibiting caste and gender-based discrimination, in order to improve the situation of Dalit women and girls in Pakistan, who are often denied the right to a life in dignity and respect.