Dalit representatives from South Asia and Japan met the leading human rights official, Madam Navi Pillay, in Geneva on 16 September. The High Commissioner assured that all forms of discrimination – including caste discrimination – will remain a priority concern for her office. 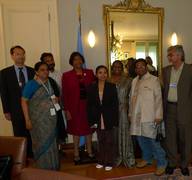 Passing laws against caste discrimination is not the only thing that matters – the response to the laws is also important. This was the message from the UN High Commissioner for Human Rights, Navi Pillay, when she met civil society representatives from South Asia and Japan during the 12th session of the UN Human Rights Council in Geneva.

Activists from groups facing caste discrimination in India, Nepal, Pakistan, Sri Lanka and Japan presented perspectives on the key challenges facing their communities in the respective countries. They spoke about the urgent need for effective implementation of national laws and special measures to eliminate caste discrimination, and about the discriminatory patterns and structural barriers preventing them from obtaining equal access and opportunities to civil, political, social, economic and cultural rights.

As a symbolic gesture the High Commissioner was given a piece of brick from a broken dry latrine to represent the global struggle against manual scavenging, an inhuman practice where Dalits are employed to clean public toilets by removing human excrement with their bare hands. The brick was handed over to the High Commissioner by Mr. Wilson Bezwada, who is one of the movement leaders fighting for the eradication of manual scavenging in India by 2010.

The High Commissioner listened carefully to the presentations made by the representatives and thanked them for giving her the opportunity to meet. She said that the presentations made her realize how widespread caste discrimination is; that it exists all over. She also said that it is not just the passing of the law that matters; it’s the response that we get. She commended the representatives for their admirable work in their countries and appreciated the way that national and international organizations were working together to tackle this issue.

Ms. Pillay assured the group that combating all forms of discrimination will remain a priority concern of the work of the Office as outlined in OHCHR’s Strategic Management Plan, and that caste discrimination falls under that priority. In March 2009 the High Commissioner addressed the need for enhanced efforts to combat caste discrimination during her first official visits to India and Nepal (link to news article). Caste discrimination has been called the “hidden apartheid” of South Asia as it resembles the system of racial segregation and discrimination practiced in South Africa until the early 1990s.

The High Commissioner thanked for the invitation to make an address at the UN side event on discrimination based on work and descent on 16 September (link). At the side event, Ms. Marcia V.J. Kran, Director of the Research and Right to Development Division, presented a statement on behalf of the High Commissioner in which she said that the “OHCHR at its headquarters and through its field presences will continue to gather information and support the development of practical strategies to address the phenomenon of discrimination based on descent”. Ms. Kran also said that “the OHCHR stands ready to cooperate and offer technical support to strengthen national systems to address caste-based discrimination.”

Press release on the HRC12 side event