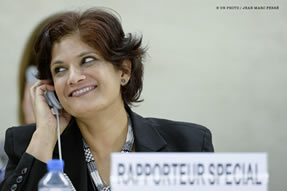 Urmila Bhoola, UN Special Rapporteur on contemporary forms of slavery, including its causes and consequences.

The United Nations Human Rights Council (HRC) commenced its 33rd session on 13 September. This year the report of the Special Rapporteur on contemporary forms of slavery, including its causes and consequences has a thematic focus on debt bondage. The rapporteur notes that “the majority of those in debt bondage are reported to be in India, Pakistan, Bangladesh and Nepal, despite the specific prohibition on such practices within the legal frameworks of these countries”, underlining that those who are trapped in debt bondage in South Asia are predominantly Dalits.

Other reports also address caste discrimination. The Special Rapporteur on the human right to safe drinking water and sanitation Mr. Leo Heller presented his report and argued that particular attention had to be paid to inequalities resulting from social factors including that of caste and gender.

In his opening statement High Commissioner Mr. Zeid Ra’ad al Hussein warned against “the severe and long-standing issues of discrimination based on gender, caste, religion and ethnicity”, which he notes “as the past has demonstrated, could swiftly lead to violence”.