Caste-based slavery in the mining sector highlighted in UN debate

The UN Special Rapporteur on contemporary forms of slavery noted with concern that children from marginalised groups, including tribal and lower caste communities, are “doubly vulnerable to abuses” in the mining sector. 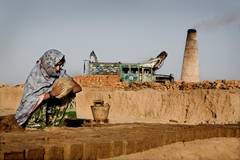 Umerkot, Sindh, Pakistan, April 2008. 40 families of the Oad caste in Pakistan’s Sindh province work at this brick factory. Among them is Phoolan, her three children and husband. Whether they borrowed money from the owners, also of the Oad caste, is not clear, but very likely. They get two euros per 1000 bricks which is the amount they can produce in one day

In her thematic report to the Human Rights Council (A/HRC/18/30) the Special Rapporteur explored the root causes, manifestations and aggravating factors that lead to child slavery in the mining and quarrying sector:

46. Many children who work also come from groups that have been discriminated against and/or marginalized, for example, indigenous peoples, migrants or those given a certain social status such as caste. For example, countries may have a highly stratified society which in many communities dictates the kind of work one does. This means that a family from a particular stratum can only perform certain jobs. The lower you are in this stratified society the lower paid the jobs that one can perform. Consequently, one finds that many children who work are those from the lower strata. This makes them doubly vulnerable to abuses.

In South Asia the Dalits and tribal groups represent a large majority of those who work in mines. According to an ILO report (2005), bonded labourers in mines tend for the most part to belong to the Scheduled Castes and Scheduled Tribes in India.Reports released in 2010 reveal the desperate situation for children and adults living and working in mining areas in India. Among them Dalits, Adivasi (tribal groups) and women are the main victims.

In the interactive dialogue with the Special Rapporteur, Fransiscans International made a statement on child labour in South Asia:

“Children exploited in extractive industries, and in particular in small scale and informal mines, are trafficked internally and across the borders with Nepal and Bangladesh, and mostly belong to the Dalit and Adivasi. In average, children start working at the age of 12 and many others are believed to work alongside their parents because their small bodies well fit the narrow coal seams. Children working in mines and quarries suffer from displacement, lack of food and education, and health threats. They are also exposed to criminality, prostitution, dependency from drugs and alcohol, and caste-based discrimination.”

IDSN made specific recommendations for this interactive dialogue, which called on state and non-state actors to share good practices in tackling discrimination based on caste in the mining sector.

Furthermore, IDSN recommended governments and UN experts to make use of a comprehensive framework, known as the draft UN principles and guidelines for the effective elimination of discrimination based on work and descent. It can serve as a tool to enhance the promotion and protection of human rights for children from caste-affected communities, and as a framework for developing national action plans to eliminate such form of discrimination.

IDSN recommendations for the 18th session of the Human Rights Council

“Mining and its effects on children, women, Adivasi and Dalits”, briefing paper by the India Committee of the Netherlands, 2010 (supported by IDSN)