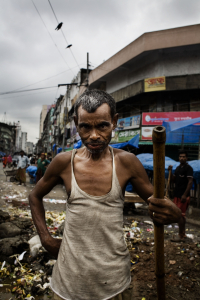 This Dalit man works as a sweeper in Dhaka. Many Dalits are not able to break out of traditional caste occupations due to discrimination and stigma.

Ahead of the review IDSN, NNMC and BDERM submitted an alternative report to the Committee, documenting how the Dalit population in Bangladesh continues to be exposed to systemic discrimination based on caste. The report also highlights the most prevalent forms of discrimination against Dalits, including restrictions in their access to adequate housing, land, water and sanitation, and discrimination by employers.

Sarah Marandy, Coordinator of NNMC contributed to discussions between the committee members and representatives of civil society at a separate meeting and Zakir Hossain of BDERM gave an oral statement at the review.

“We urge Committee members to ask for the government to provide information on concrete examples of initiatives which the government will enforce to eliminate the existing discrimination against Dalits in Bangladesh. In addition, we urge the committee to recommend the Government to provide a timeline for the urgent adoption of the anti-discrimination act from 2014,” Zakir Hossain, Bangladesh Dalit and Excluded Rights Movement (BDERM)

The review was conducted by the body of independent experts that monitor the implementation of the International Covenant on Civil and Political Rights (CCPR).

IDSN will monitor the concluding observations once these are released to check for adequate mention of caste discrimination and add these to the IDSN documentation archive.