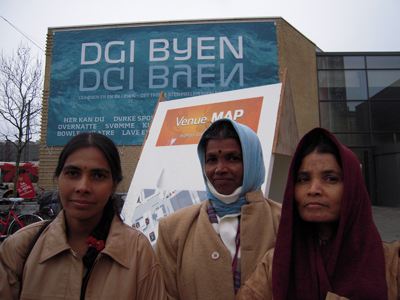 Three Dalit women came to Copenhagen from Andhra Pradesh in India to take part in COP15, the UN conference on climate change. They call themselves ‘food sovereignty activists’ and advocate sustainable methods of agriculture. We spoke to them during their stay.

The impact of climate change is often felt most heavily by the poor and the marginalised. This is also the case in the Medak District of Andhra Pradesh in India where extreme heat and erratic rainfall complicate the lives of village communities.

“Climate change does make it more difficult. If there is drought or unseasonal rainfall, the first thing that suffers is crop cultivation. If there are no crops, it is difficult for us,” says Sammamma Begari, a Dalit woman from the village of Bidakanne.

Speaking through an interpreter in her own language, Telugu, she found time, in the middle of a busy day of demonstrations and meetings, to talk to this website at the alternative Climate Forum for NGOs in central Copenhagen.

The consequences of climate change affect small farmers more than big ones, the women contend. They also claim that the farming methods they use are more sustainable than the industrial methods applied by big farmers.

“Upper caste farmers use machines to plough their land, heightening the climate crisis with fertilizer and other things. Our impact on the climate is much smaller. Larger farmers grow money, we grow food,” says Narsamma Managari, another activist.

On 16 December, they women took part in a protest outside the COP15 conference centre. They believe that the poor and the excluded have had too little say in the talks. There are similarities between this exclusion and the type of discrimination they suffer as Dalits in India.

The degree of discrimination varies. In Narsamma Managaris home village of Pastapur, she has managed to gain the respect of the community. In other, more remote, villages, such as Edulapalli, where the third woman, Manjula Tammali, lives, things are different.

“In my village, we are not allowed entry into temples. In tea shops there is a system of separate glasses for Dalits, and we are not allowed to enter houses of upper caste people. Dalits are also left with specific occupations, such as digging graves for everyone in the village. It makes me angry, but it has helped to be part of this organisation,” she says.

Manjula is referring to the Deccan Development Society (DDS), a grassroots organisation working with women’s groups in about 75 villages in Medak District. All in all, about 5,000 women, most of them Dalits, are involved in DDS programmes. Manjula, Narsamma and Sammamma work with the DDS Community Media Trust and have brought digital video cameras to Copenhagen to document the COP15 event.

Grassroots work has enabled the women to take charge of their own lives and be less entrenched in centuries-old patterns of caste prejudice. In a number of communities, Dalit women are regarded with respect by their fellow villagers.

“We have shown that we are organised and have taken control of our own agriculture. We have no obligations towards bigger farmers. And through lots of activities, we have demonstrated the leadership skills of Dalit women. Dalits have become village council members and taken leadership of villages. If there is a conflict that needs to be resolved, our women are on the panel,” Narsamma Masanagari points out.

The women have fought hard for their rights, and their struggle has gone through different phases. They had to combat discrimination based on caste as well as gender. Now their different struggles have merged into what they call ‘food sovereignty activism’. In her lifetime, Narsamma Masanagari has seen a lot of changes.

“When I was a child, my mother was a bonded labourer for an upper caste household. I used to stand watch over the landlord’s fields. We have grown a lot since then.”

Read the news story on the Dalit women